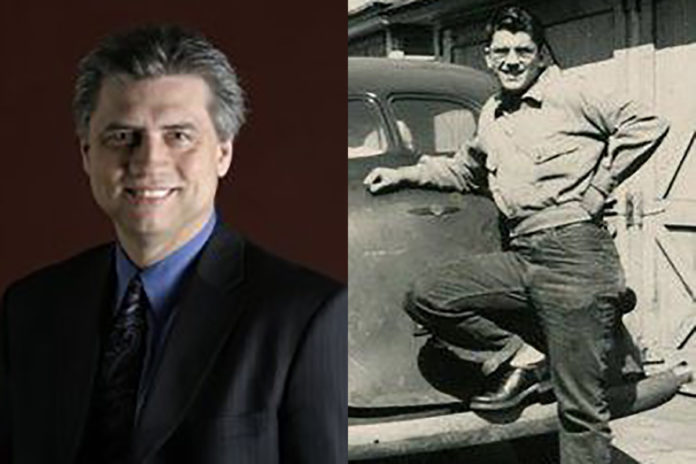 The routine was always the same. Winters, usually; summers occasionally. The search for a new car always occurred in the extremes of each season.

Dad, in an effort to make his $112-dollar-a-week paycheck stretch farther for his family of seven, would make the annual pilgrimage to a local used car dealership, where he would trade his innate knowledge of all things mechanical for a car that would get Mom to work.

“Got any old iron?” Dad would shout into the doorway, where owner Frank Whalen (a family friend) would be waiting. With a laugh, he’d hand over keys which were attached to a large wooden peg.

“Pete, I’ll make you a deal on anything on the back lot,” Frank would always say, and then move on to customers with money.

Behind a padlocked gate was the back lot where unwanted cars were dumped. Tattered Studebakers stood stacked along one fence; Ramblers sighed in the wind.

It was a place where cars went to die.

“Look for the ones with all their glass,” Dad would say between drags on a Kent cigarette. “Good rubber, too.”

I’d canvas the rows looking for cars meeting the vital prerequisites as spelled out by Dad.

In short order, my father would use his superhuman ability to sniff out the most car for the least money. Soon, we were priming dusty carbs and cleaning plugs.

This was no pleasure cruise; Dad was perpetually exhausted from working two jobs. Serious business was afoot.

We’d bend over cars, flashlights in hand, turning wrenches, wordlessly eliminating problems. He could be quick to anger—something I now attribute to his disgust at having the joy of working on cars turned into a financial necessity.

“Hold the flashlight STILL!” he’d say, and I would freeze. Many moments of silence would follow.

“Denny, hold it steady . . . good.” After his brief explosion, he’d always backtrack and say something supportive. He would stay on task, which was, ultimately, to provide for a family on a high school education and pure guts.

Frank would wait at the gate for us as we packed up.

“Got another prize, huh, guys?” he’d remark as we left the lot. Dad would get home, wash his hands, eat a listless dinner, and drop off to sleep literally in mid-sentence.

But he never complained about this routine.

We did this every year until I went off to college. Even then, when I returned, sick cars would be waiting for me. My brother was now the one holding the flashlight. Dad was now in the observer role. I always thought the pressures of having to work on cars under pressure for years had taken the joy out of the experience for him.

I have turned a wrench infrequently over the past decade. The Studebakers and Ramblers are long gone.

In the rare moments when I have to look under the hood, I grasp the flashlight and Dad speaks to me still.

Peter Barrett is an actor, TV station manager, a four-time Emmy Award winner, and (thanks to his father), a pretty good mechanic. He is based in Champaign, Illinois.