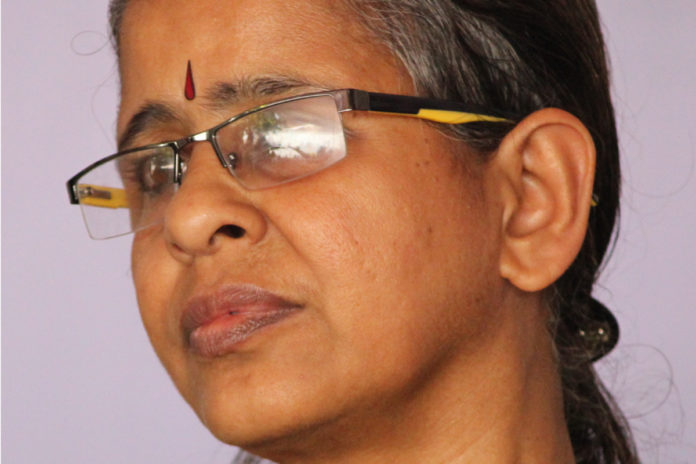 Mounted
on a sunray
she journeys
afar
to forget,
to part.

Hears only
his footsteps
in the dark,

His breath spreads
in receding forests,
the crescent teases
with his smile.
Waves deliver
messages in his voice,
the sarod of wind
plays his music.
Moonlight caresses
gently, like him.
Sky heaves
like his chest,
dissolves.

Will she return,
the one who is sailing
abroad in a leaking ship?
Will waves swallow her?

Laila and me splits a dream.

Let’s capture the pictures of rain.
Girijechi, do you remember the shot
of downpour poised to uproot the roadhouse?

A jungle where sunlight, summer
shade and avenue tangles.
Is the camera a poet?

You can even see
the dark/silvery flapping of wings
on her tiny face.

The forest within mind,
the spring that whistles in the forest,
the sword-clanging of wild animal claws,
the human life tragedy,
a story in different tongue at various places,
the silent forest that play acts as a multitude:
an intersection of hundred roads,
a thousand places —

Laila imagines Rashomon as
the Genesis flood that permeates,
dissolves all places and time into one.

Slanting, babbling,
walking on a string of pearls holding an umbrella,
hanging on trees,
leaping from the veranda,
raising the tomb of mist on the field,
shouldn’t we make a cinema on rain
that transforms into many?

Then,
I lay on my stomach
on the cold floor
and became a heap of snow..
You sleep afar
naked,
like a cloud emptied of rain,
relieved.
I become the earth
shredded by lightning,
wounded…
Beneath the soil layers
clamor, laughter, youth, love.
That first time when you
filled my body..
Is all that a lie?
On the cold floor,
I am a nude sculpture.
Me,
a dark moonlight that oozes blood.

V.M. Girija (born July 1961) is an Indian poet and essayist, writing in Malayalam language. She has published a number of books, which include Prem – Ek Album, the Hindi translation of her poetry anthology in Malayalam, Pranayam Oralbum. She is a recipient of Changmpuzha Award for literature.