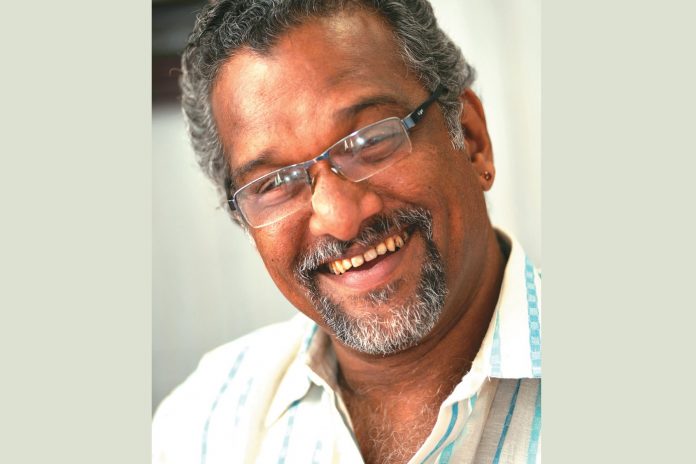 This is the smallest house
in the colony.

The room is muggy
though the fan is switched on.
Mom doesn’t realize it.

Then,
she had many reasons to stay awake.
The simmering rice pot
the kids playing in the courtyard
the cows tethered in the farm
dad, uncle, and we children
who leave saying will be back in a bit,
not to return even after many days.

Those things,
those selves are no more.

Then,
mom wouldn’t have slept
when I fell asleep,
and she would be awake before me.

Like rivers, lakes, trees, hills and fields,
I thought she never slept.

As I witness her in deep slumber,
I can see rivers, lakes, trees, hills
and fields sleeping.

Do they see dreams in their nap?
I will ask mom when she wakes.

(Note: In response to Ben Okri’s poem, My Mother is Sleeping)

Four legs
for each shadow

a wagging spotted tail
for each stillness

five sharp claws
for each silence

a mouth that opens into abyss
for each darkness

in each eye that rises,
the foetus of a rat.

I dreamt about sleep
in my sleep.

In the dream..
I dreamt about..
sleeping..

though I woke up from sleep
and from the sleep in all my dreams,

though I kept waking over and over,

a sleepy life,
many sleepy lives went by.

Thachom Poyil Rajeevan, also known as T P Rajeevan, is an Indian novelist and poet who writes in Malayalam and English. In English, he has published a novel (Undying Echoes of Silence), and two poetry collections (Kannaki and He Who Was Gone Thus). He has also edited an anthology of poems (Third Word: Post Socialist Poetry) with Croatian poet, Lana Derkac. His published works in Malayalam include: two novels (Paleri Manikyam: Oru Pathirakolapathakathinte Katha, and KTN Kottoor: Ezhuthum Jeevithavum); six poetry collections (Vathil, Rashtratamtram, Korithachanal, Vayalkkarayil Ippolillatha, Pranayasatakam, and Dheergakalam); a travelogue (Purappettu Poya Vakku); and an essay collection (Athe Akasam Athe Bhoomi). Rajeevan was awarded the Kerala Sahitya Akademi Award for his novel KTN Kottor: Ezhuthum Jeevithavum, in 2014. He is also a recipient of the Madras Malayalee Samajam Award and K. Surendran Award.