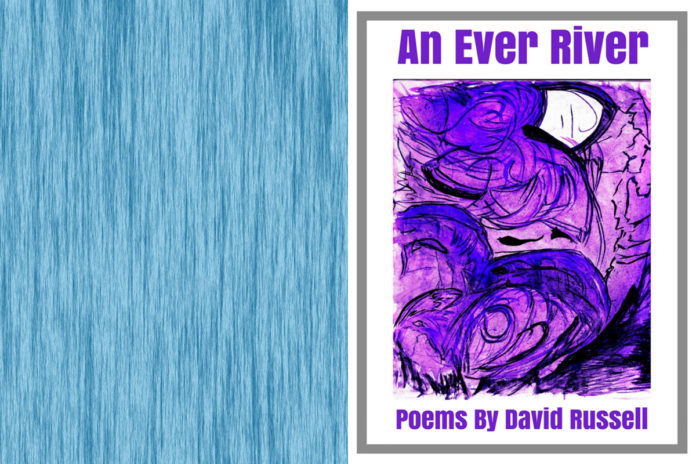 As the title of Dave Russell’s collection suggests An Ever River bursts and blisters with references to the elements, nature and humanity’s emotional connection to Ecology. The collection is packed with metaphor, immersed in scientific references at turns offering an indictment of man’s ignorance and greed, contrasted with a deep sadness for the seeming impossibility for the human race to get its act together and actually cooperate to curb its destructive behaviours on each other, on nature and on the environment.

The opening poem With Respect to the Whale pulls no punches. Russell sets the tone of his collection, honouring the carcasses of rare or extinct species set behind glass in the Museum – mirrors of the path trodden by humanity, he says. There is the inevitability of the self-destructive course we are taking, to the point we are rendered ‘mere cinder-blistered slime’.

no species that survives will honour you;
in all your seeming strength your final weakness,
cutting your lifelines with your every grab
for further power and satiation.

As a counterpoint there is hope in the form of nature’s resilience within a sensibility that gives more than a nod to the New Physics immersed in Eastern mysticism. It is a poetry of the Apocalypse, a meditation on power and a hymn to the cycles turned since life emerged from ‘the primal ooze’ and the balance of power that has kept wheels turning. An Ever River flows like the thoughts of a god overlooking the history of life itself – a commentary on the paradoxical nature of the universe and the question that surround its existence and the proof of its unwavering impossibility. And then a spark of Russell will suddenly break through the stream of reflection on the primal soup as in Mid-Life:

So much happened;
so much didn’t –
so nice to remember;
so painful to recall

Or the text will turn from the macrocosm to the microcosm as in In Transit where it is as if God had come to analyse the atoms in a tube train, its carriages and the seats within its carriages. God may have made man in his image, but Russell’s commentary suggests he may have lost a sense of self in the process – although not at the expense of an obscure humour.

But you still like the idea of topness and paperness as something
permanent – Without it, the pretty design will truly go to pot – being
merely liquid.

Russell’s text is dense with imagery; he paints with words, a master of abstraction, teasing remnants of representation from torn ligaments. Alchemist, for example, reads like an instruction: ‘Sing, earth-captured starlight…Sing through my blinking tubes and phials.’ There is no clear conclusion resulting from the ‘small breedings / in clean-forgotten courses’ except for the satirical playfulness that pulses rhythmic and cutting.

In conclusion having known David Russell’s work over several decades, it’s a delight to see this collection from Palewell Press with a few old favourites. It is the poetry of a keen intelligence with a love for words and the sounds and imagery that can be teased from them.

Republished with kind permission of Colin Hambrook, editor of https://disabilityarts.online

An Ever River is a pamphlet of surreal Eco-poetry by David Russell, editor of Poetry Express Newsletter. In An Ever River, David voices important environmental concerns about all types of environment: natural, artificial, human, urban, mental, emotional. Many of the poems speak up angrily on behalf of the natural world and how its creatures suffer at the hands of humanity, yet David’s writing also has a startled, questioning beauty.
An Ever River was published in April 2018 by Palewell Press, UK (www.palewellpress.co.uk)