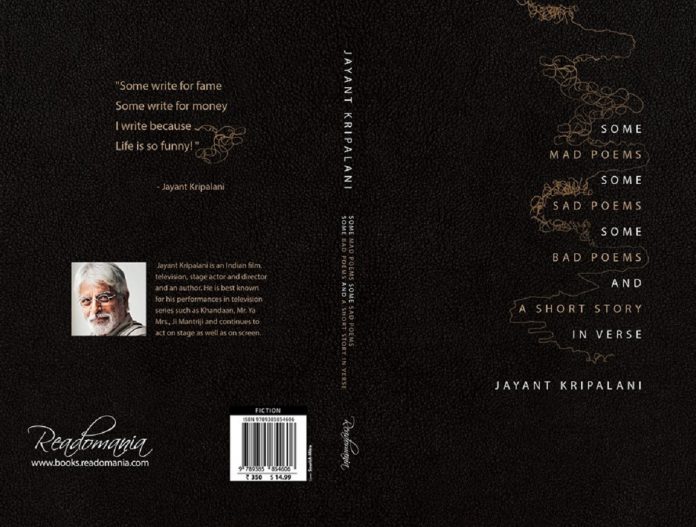 Jayant Kripalani’s is a return to a kind of poetry few people write these days. As he himself writes, his verses cannot be deconstructed or called modernist or post colonialist or any of those other terms that reviewers and academics use. His poems are for the most part short and sometimes amusing. Quite often their have a dark humour that underscores the dark political essence of the times. As for example his meditation on a telephone directory that would save a huge oak from being cut down if the Muslims were culled from its pages but that would actually save a whole family tree perhaps if the Modis and Shahs were removed. Once could say that telephone directories are things of the past these days but Kripalani’s point comes through sharply at the end after having the reader wonder why there are so many Muslim names to begin with. So sharply that one wonders what the Modis and Shahs would have to troll about it

Nonsense verse also forms a great part of Some Mad Poems, Some Sad Poems, Some Bad Poems – typically the collection’s title is not short and sweet but long and descriptive ending in the fact that there is also a story in verse. However, to return to the fact that Kripalani does take on the mantle of Edward Lear and the limerick days though with his own Indian twist – as when he mentions Nietzsche’s ‘beechies’.

The short story in verse about Shakuntala and her non Bengali boyfriend strikes an autobiographical kind of chord somewhere – the outsider who is unwelcome as a suitor in a Bengali family dominated by an angry patriarch and the tale ding dongs between Calcutta and the UK with Kripalani’s twist in the tale when the poet persona is appointed executor of his father in law’s will since he is the only one with no axe to grind.

In between, affectionate digs at the Calcutta he lives in creep up on the reader – like the cluster of hands waiting to pull people up on a bus or the reference to Jadavpur’s hokolorob campaign which caused a Vice Chancellor to lose his job.  Calcutta with all its  chaos is quite unlike other cities with their vicious anarchy.

Occasionally Kripalani’s verses are closer to prose and they often skim an almost haiku horizon. However, none of that detracts from the clarity of his messages. Life in India can be nasty, brutish and short but a sense of humour helps one get over it in one way or another.  Whether we call it mad verse or sad verse. Or whether it’s just the darkness that drives the political parties transported with a light touch.

The poems are likely to evoke raucous sessions at parties with much nudging and winking, not to mention hilarious toasts.

A sample poem from the collection:

Colon v Colon
Two dots that don’t stand on ceremony
As each exercises its hegemony
Sometimes it precedes a long list of items,
Or before a quotation that heightens
An expansion, or an explanation
Of a mathematical equation,
Or in a numerical statement of time
Separates hours and minutes – that isn’t a crime.
A minor little asset to our grammar
One that is needed but lacks any glamour.
If the lower dot is replaced by a comma
It doesn’t cause too much of a trauma
And without offending either you or me
Becomes a colon that is largely semi
The other colon is a bit of a beast
Five feet or more at the very least
The very last part of the GI tract
That traps all the water and all the crap
Before they’re evicted from the base of the bum
From the hole that we politely, call a rectum.
And if you’re having a problem with humour
You’ll have more of one when it grows a tumour
Which if it decides to be malignant
Will make you feel more than just indignant.
Life can become a terrible drag
As you carry around a colostomy bag,
It’s hugely offensive for both you and me
That this colon too, has become a semi.

Details about the book: