..story about my mother’s hands and all they’ve borne witness to, and how our hands can store memories and be the reservoir of our life’s experiences.

You wipe the couch clean, with a kitchen towel in your right hand. Daddy was just sitting there and had spat upon it. It was probably the sixth time today that you cleaned up after him. It’s a routine you’ve gotten used to: you tell him to always carry a towel on his shoulder, so he could clean it himself, but, fifteen years of Alzheimer’s has had its toll on him and he doesn’t remember what you said a few minutes ago. And so you move on to the next thing, which, often, is to rub his back and place your hands on his heart and tell him that you love him so much. You remind him that despite all the challenges, you’ll be there for him every minute.

There’s a faint wet glimmer in his eyes – maybe tears, maybe nostalgia for the times when he was younger and free of Alzheimer’s – and you take his hand, cup it in yours, close your eyes and think of how different things were earlier. Maybe you think of that day from over forty-five years ago, when you got married and held his hands as you both walked around the holy fire circle, reciting your sacred vows.

You both sit on the couch, holding hands. No one says a word; he doesn’t express his feelings much these days, but I know that whatever he wants to say but can’t, is being given a loving refuge in your hands. I believe that hands are more than a collection of twenty-seven bones, two arteries, nerves and skin, as glorious and amazing as it is biologically. Sometimes, unsaid words morph into feelings which make their way into our hearts and minds and rest there as memories; other times, it’s the tactile sensations associated with an event that make a home in our minds. Either way, our hands are the door through which that sacred journey begins.

And just like any door, things come and go both ways. I invite you to bring your hands near your face. The closer you’d look, the deeper that rope, attached to the bucket of the past, goes into the well of your mind and brings up to you a gift of memories. Everything that your hands had borne witness to, is now bubbling up to the surface and you start to wonder if your hands were silently keeping track of every moment of your life. It feels like a film was being recorded all along and it’s always ready for you to replay; all you have to do is to pay attention to your hands and ask them: tell me, my loves, what was it like?

And, like an ever-faithful partner, your body will open that door of the past and let you into the magic that resides within, replaying that roll of film and painting before you all those experiences you’ve been through and had thought were lost, but instead, were saved lovingly in the recesses of your body.

I don’t know what was going through my mind or body. After all, it had just been a few minutes since my journey on earth had begun. You were looking at me, holding me in your hands with a smile on your face. I had no idea who you were or where I was. Quite likely, I couldn’t even see you clearly. But your hands were there, nestling me in their love and affection. If I could’ve articulated it then, I might have said that I felt like a newly-hatched bird poking its head out of the egg that rested safely in the nest its parents made.

And that day, in a small town in Maharashtra, India, forty-three years ago, was the start of my getting to know your hands, my dear mother. Your hands.

It’s a bit of an understatement to say that ever since I was a kid, I loved food. And when I look at photos of my childhood now, I can’t help but feel hungry and nostalgic: your right hand, laden with lentils and rice, feeding me. I probably bit your fingers hard, wanting to get every single bite of food in. Your hand would go out and come in again, cupped with more food. ‘More, more’, I’d keep saying, pointing at the food, and you’d keep feeding me. As you eat your meals these days, do you look at your fingers and reminisce about all the people they’ve fed through your life?

It’d take me a day and a half to get home from undergrad school. I’d come home twice a year and every time I’d knock on the door, you’d open it and your hands would wrap around my body. I was home, in more ways than one. Do you remember how they felt and what they felt, as you welcomed me into our home?

How do they feel now, in this moment, when you look at them? Can you see all those decades scribbled on the wrinkles that adorn them? I remember those Diwali nights, when I was in my early teens, and how you used to fire up a matchstick, held between your thumb and index finger, and light earthen lamps in our balcony, while my sister, Daddy and I would stand next to you and clap, dance and sing songs, with people in the alley downstairs setting off firecrackers that flew as high up in the sky as my dreams. If you look at your fingers now, does your heart fill up with longing for those carefree bright nights?

What about that time when I was leaving India for the US – going to grad school, something that I had worked all my school years for and was a dream come true – and you, Daddy and I were at the airport and I was about to board the flight, and your hands, delighted and proud as they were, didn’t want to let go of me? Do you still feel that tug now or have your hands come to terms with life as we know it?

You look at your hands now and they’re not holding mine. What happened in between? You’re reminded of how everything changes and how being in the present moment is a gift that’s often forgotten. And, while paying attention to your hands and bringing up memories can be a gratitude-laden act, your hands also remind you of the imperative of living your life in the present moment.

Do you remember that late January evening when my sister’s wedding ceremony was wrapping up? She hugged you and held your hands before getting into the car with her husband as they started driving to his home. It was the beginning of a new era, a new journey in her life. How did it feel as her fingers slowly drifted out of your hands? Was sadness making your hands tighten around hers and refusing to let go, or was joy tingling through them, making it easy for you to say bye? That was six years ago. How do your hands feel now? When you look at them, do they remember that evening, with people singing songs near the car and throwing flowers upon the newly-wed couple?

Your mother, my beloved grandmother, passed away over a decade ago. You went to her funeral and touched her ashes with your bare hands. What was it like to hold dust – your mother’s body – in your hands? Where did the grief from that event go? Our bodies talk to us in many ways and sometimes our emotions express themselves physically. Maybe there’s an invisible creek of sadness flowing through the wrinkle that’s carved along the heart line of your palms? After all, she had held and kissed your hands countless times, and all that love lying underneath the skin had to manifest somewhere.

There are events that stand out significantly in our minds, and then there are those that are fleeting and seemingly run-of-the-mill: that time when you smelt the rose blooming in the pot in the balcony and bent down to touch it, and a drop of rain water that was lingering on the petals, dripped onto your finger; that moment, almost four decades ago, when you and I were standing by the side of the road, waiting to cross it and you put your hands on my shoulders to make sure I didn’t run into the traffic; that afternoon when we went out for lunch with your brother and the food was so delicious that your fingers, dripping with curry and lentils, refused to come out of your mouth, as you sucked on every last bite of the food.

Gratefully, there is no bouncer at the door of our hands, checking and evaluating each event: they all make their way in, regardless of how momentous or mundane they might be. After all, every moment is sustained on the foundation of our in-breath and out-breath, and life doesn’t distinguish between the breath when you were caressing our twelve-year-old dog Annie, who passed away more than two decades ago, or the breath when you were carrying grocery bags home on that hot summer afternoon, with sweat dripping down your fingers.

I have in my bedroom an embroidered wall hanging that you made. It’s around sixteen square feet of a detailed multicolored drawing of plants, flowers and trees. I wasn’t home with you when you were making it, but I can imagine you spending hours working on just one tiny patch of cloth, your hands winding the thread around to manifest it in the shapes you had in mind. Now, when I look at it and touch it, I can feel your hand moving across the cloth and sense the love and affection that went into making it.

As I’m looking at it, my shoulders relax and untighten. We’re ten-thousand miles apart, but I can feel your hands on me, as I’m reminded of a photo of the five-year-old me, standing next to you in the front yard of your parents’ home, smiling and shying away from the person taking the photo. I don’t know how to explain that journey from me touching your embroidered artwork now, to my mind automatically replaying the sensation of your hands caressing me thirty-eight years ago. But perhaps that’s the magic that silently plays in our hands, hearts and minds, a magic that neither needs nor offers any logical explanation.

Daddy gets up from the couch and starts his morning walk in the living room. It’s ten a.m. and a cool breeze wafts in. You look outside, at the balcony. For a brief moment, the decades-old memory of us all celebrating Diwali comes to your mind. Your heart wants more of that nostalgia. It’s hard to look at a door and guess who all have been through it over decades, but luckily, with your hands, they know. You just have to turn them around, palms facing up, and ask them that beautiful and vital question: tell me, my loves, what was it like? 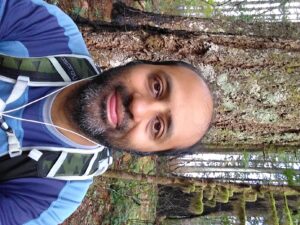 Kunal Mehra is a multimedia artist who likes photography, filmmaking, writing and hiking. He grew up in India and has been living in Portland, OR, since 2002. His writing has been published by the Press Pause Press, The Mindful Word and Across the Margin magazines, amongst others.