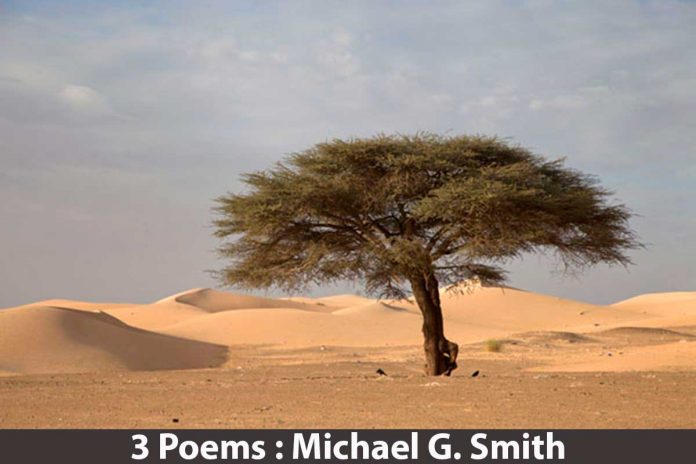 How To Approach a Tree

As if it were the sole
being in a sea of hot sand,
its furrowed bark an open

gate to the pure land
you had searched for your
entire short life. As you would

swim to a polished rock above
big water, the running waves
mammon. As you would gently

speak to a soaked stray
shivering in a December snow,
or meet the child holding

out a hand, her soft fingers
folded around the one thing
she wants to entrust to you.

We think the bird in the bare cottonwood is a migrating
Tanager, but when it launches itself into the sky and trills
we know it is a common robin, and a common robin
is no small thing, like this warm evening on the edge
of spring is no small thing, you and I perched on a fraying
plywood platform beneath a cliff crumbling to the creek,
your boyfriend’s dog alert to the woods and small
movements and creaking branches sitting between us.
As daylight sinks, your voice quivers with concern
for your alcoholic near-broke brother who woke next
to his dead wife yesterday, how unimaginable his life must
be. Scratching Dulce’s ears I remind us Wendell Berry said
you have to be able to imagine lives that are not yours.
And I can say this because tomorrow you will wake before
first light touches the hillsides to drive to Albuquerque
to board a plane to put yourself in David’s wrenched
and squeezing life because this is what we do when called
knowing only one thing can be said in response.
And this is the way things funnel into other things. A bird flies,
calls, becomes robin. Tectonic plates slide to earthquake
to tsunami to molten nuclear reactor rods to men working
against impenetrable odds. Prayer flags flap and seeds are carried
by winds of every shape and color to land in new soils.
Some will root and flower. Others will be stillborn or wither
in dry ground. As our talk slows, the sky turning to this evening’s
singular mix of purples, I imagine you must feel like a seed
suddenly carried aloft by a sudden gust, your thoughts winged trajectories over the unsettled space ahead. And what of this space?
Rilke wrote the future stands still but we move in an infinite
space. We fall silent and as a dozen of last year’s brown leaves
whirlwind down the trail I watch you peer into the tomorrow
and the tomorrows afterward waiting for you to arrive to do
what they know you will be able to do.

You and your precise science
explain frisky lightning,
elves and sprites,
ball lightning confused
with rummaging alien craft,
dorje, enlightenment’s thunderbolt,
and now we can laugh about the stalled
ski lift, a churlish sky dropping wet snow,
cables arcing above our heads.
I say I like the word fulgurite –
fused sand, petrified lightning,
inklings we can hold
something permanently.

Then, you and your exact science
reveal lightning always
hurls return strokes.
I catch bolts from the blue –
the neighbor pruning roses
beneath a flawless sky,
an email spelling out
a friend’s heart attack,
the call from the kid
driving her first cross-country trip
from somewhere along a straight,
still stretch of basin and range country,
her voice thick with amperage.

Michael G. Smith is a chemist. His poetry has been published in many journals and anthologies. The Oregon Poetry Association recently selected his poem Disturbance Theory in their fall 2017 contest for the New Poets Award given to a poet who has not received a monetary prize before. No Small Things was published by Tres Chicas Books in 2014. The Dippers Do Their Part, a collaboration with visual artist Laura Young of haibun and katagami based on their joint Shotpouch Cabin artist residency, was published by Miriam’s Well in 2015. Flip Flop, a volume of haiku co-authored with Miriam Sagan, was published by Miriam’s Well in 2017. 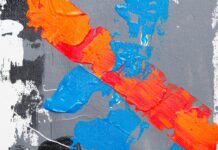 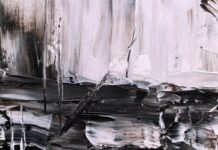 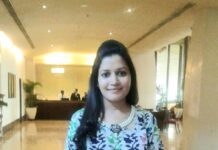 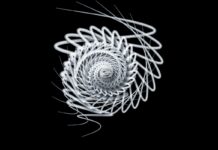 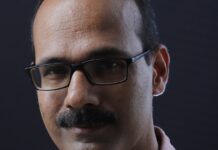