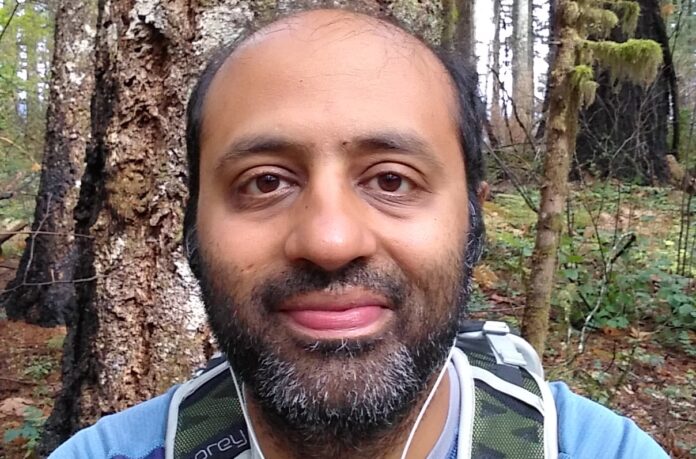 Every summer, starting when I was around eight, my mom, sister, and I would pack our bags, buy train tickets and hop on the train that would take us to my grandparents’ home, a journey that would take over thirty-six hours. My dad, unfortunately, couldn’t join us as he was busy working.

Being on the train was a trip in itself. At every major stop, a horde of vendors would walk through the bogies – as train cars were called in India – peddling their wares, which ranged from freshly-made omelets wrapped in yesterday’s newspaper to reinvigorating masala chai served in hand-cast earthenware cups. Outside, on the platform, whole lives played out: families with suitcases packed waiting anxiously for the train to pull in; illegal business deals being conducted towards the quieter ends of the platforms; cobblers cleaning cops’ shoes and wrapping up the transaction with a foot massage; grandmothers sitting patiently on bags of rice reading newspapers.

Curious as always, my sister and I would soak in the sights, excited to be getting closer to our summer home. Our cousins and their mom were also on their way there, and, ironic as it sometimes sounds now, the more family members there would be, the more fun and love we knew we could expect.

We’d play games with our cousins, like walking barefoot atop the wall that ran across the periphery of their home and having competitions where we’d try to outrun each other. The winner would get to lie down on the wall and soak in the sun. I seldom won, but I remember lying down once with my eyes closed, feeling victorious and warm. My celebratory nap was interrupted by the touch of my grandfather asking me to get up and get going.

He wanted to take us – all four of us kids packed together – on his motorcycle to buy watermelons from the local market. Being the eldest grandkid, I would get to sit towards the front and hold on to the handlebars. I’d place my hands right next to his as we breezed past all kinds of eclectic traffic: buffaloes sitting in the middle of the road, old men hauling bags of wheat on ox carts, rickshaws loaded with mattresses and goats, elephants ceremoniously making their way through the street as part of a religious parade; nothing was off the table.

My grandfather would stop at his favorite fruit stand and after a few minutes of the customary haggling back-and-forth over the price, the watermelons would be all ours. Of course, we couldn’t wait to start eating till we got home and so the devouring started right at the seller’s stand, with our fingers being the best fork we ever used. By the time we got home, the motorcycle seat cover was sticky from our fingers splashing juice all over it and our shirts were stained red. That was the color and smell of our summer.

One of the scary-fun highlights of my summer was the “tank game”. My grandparents had an underground tank on their property. The city they lived in didn’t have 24-hour water access; the water lines would only turn on once every four or five days. They used the tank to store water till the next refill date. It was about ten feet deep.

On weekends, that tank was the focal point of fun. Two of my uncles would stand on one side of it and the third would be on the other side. Together, they’d be holding a blanket over it. They’d ask me to climb up onto the blanket. Unsure of what to expect, I’d hesitantly make my way towards it and climb onto it. Once I was lying down, the ‘fun’ would begin: they would start to heave the blanket up and down with my little shrieking body being thrown up into the air and landing on the improvised trampoline that dangled over the tank. My mom would be standing next to them cheering them on. Every time I was thrown up, I kissed the sky, hoping and praying I would make it down again and that the blanket wouldn’t tear. There were scary times when I imagined myself soaring up into the sky and then falling straight through the blanket and into the depths of the tank. But every time I landed on the blanket, I felt more and more reassured that no matter what life threw at me, I would have a support system to save me; a support system that was built on laughter, love, strength, and family.

Eating meals was another huge part of our stay there. Lunch, especially, was a communal affair, something more than just the consumption of calories. Our grandfather – the official chief of the family – would sit at the head of the table and would get the first heaping servings of hot delicious food. After him, it would be served in order of descending age. I was probably the fourth from last to get served. No one could start before he had taken his first bite; once that happened, it was a free-for-all. I, for one, would dig my fingers into the creamy vegetable curry, scoop up a good solid handful, load up next on rice, and into my mouth it would all disappear: all the spices, the warmth, love, nourishment, tomatoes, and beans. My fingers would be smelly and drippy, a sure sign that the food was tasty and that I was hungry. We’d all eat quietly, the silence punctuated mostly by slurping sounds of food being sucked out of our hands and into our ever-hungry stomachs, spoons, and forks begone. My grandmother would refill our plates periodically, exhorting us to keep eating. Eat to your heart’s content, she’d say. And I did: a fistful of food after another, making its way into my ever-hungry stomach.

Finally, tired and sedated by all that food, my cousins and I would retreat to our grandparents’ room and all lie down on the bed together, exhausted and sleepy, drifting off in our own childhood dreams, every one of us becoming what we dreamed of.

Sometime in the middle of our nap, my grandmother would drift into the room and slide me into her lap. I don’t remember if that woke me up, but she would then proceed to softly run her fingers through my hair. I distinctly remember the sensations associated with that: a feeling of warmth, safety, acceptance, of belonging, of being wanted, and of being home. She would sing sacred chants while I lay in her lap.

As I look back on it now, almost thirty years later, it feels like a life lived in a different universe. It was a phase of life, but it felt more like a different life, one bathed in love, lack of worries and cares, all held in a space and time that seemed to stretch out endlessly with our imagination being the only limiter.

The best part of our stay there was that we achieved absolutely nothing during those two months. We didn’t complete any projects, we didn’t meet any goals and neither did we come out any wiser – we just were. We played with the sole intention of playing, ate because we were hungry, were loved because we existed, and basked in the sunshine simply because the sun was out. We weren’t seeking anything and perhaps that’s why things came to us so freely.

It’s been over a decade since both my grandparents died. Thinking of them now – and the times spent with them – makes me feel like I was briefly held inside the petals of a rose, soaking in all the love, beauty, wonder, and amazement that resides within a rose. Over time, as I grew up, moved away, and gradually lost touch with them, the petals started to wilt and I started to fall out of its cocoon. Some might say that it was time for a metamorphosis, that this is what life is about – you move through people and phases – but the smell of the rose still lingers.

There are times when I wish I could drift back to those days. Maybe I would drive to my grandparents’ home – a home that has long since been demolished and built over – and find them still sitting at the table, waiting for their grandkids to come home. Grandma would have a pot of curried chickpeas and lentils ready for us. I’d walk in and there she’d be, sitting on the couch. She had arthritis, so she couldn’t get up without help, but she’d say: finally, you’re here, my love! Where have you been all these years? I missed you so much. Are you doing okay? Are you happy?

I would nod and, as was the custom, touch her feet and seek her blessings. It would feel like finally being home, again. She would run her fingers through my graying hair and I would break down, sobbing with bouts of sadness and regret. I’m sorry, grandma. I’m sorry for not being in touch with you. I’m sorry I got caught up in life outside the petals. I’m sorry for forgetting all the love that you gave us. I’m sorry for taking all that love for granted.

I’d take out my wallet and show her a photo that I always carry with me: her hugging my six-year-old self, as huge grins cover our faces. I think my mom took that photo. I’d tell her that never in my life have I felt so safe, so wanted and so loved as I did when that photo was taken. She’d smile and tell me that it’s all okay, that she’d been patiently waiting for me to come home and that she’s glad we’re finally together. It doesn’t matter how long you’ve been away, she’d say. You’re home now; let’s eat.

As summer started to wear off, our impending return home – and to school – started to feel like an unnecessarily cruel dent in our glorious lives. We were to shortly get transported back to the world of homework, routines, chores, expectations, wants and deliverables. Why couldn’t this last forever? Why couldn’t our grandparents and parents live forever and hold us there in the arc of love?

As we got older, our inhibitions, wants and goals started to creep into the summers. We no longer enthusiastically ran up to the wall to see who’d walk it fastest. Some of our cousins no longer showed up for the whole two months as they were taking tuitions for part of the summer – it was the best thing to do to ensure you get into a good college…or so we were told by the adults.

The gradual changes in my life and in all the other lives near me – cousins, uncles, aunts, grandparents, parents – hadn’t dawned on me until several years after we had stopped going there and I looked back and reminisced about those hot red-juice-laden carefree months. It’s easy to say that life got in the way of life, but the sadness – over having those summers just disappear and melt away into the recesses of our memories, over not realizing what an immensely precious time we were soaked in – never quite left my heart. It’s lodged in there and often rears its soft voice: should we walk atop the wall again now?

Kunal Mehra is a multimedia artist who likes photography, filmmaking, writing, and hiking. He grew up in India and has been living in Portland, OR, since 2002. His writing has been published by the Press Pause Press, The Mindful Word, and ‘Academy of heart and mind’ magazines, amongst others.