My guts abhor you
as much as you abhor my guts
and every chance I get
I damn you
like a sadist mirror
showing the lady perfectly clothed
swearing falsehoods on the Red Shrimp Book
bloated so I cannot walk
bloated as a gloomy whale after
a week on an Australian beach
I think of my heartbeat
and count
on vengeance
on all those
who lie
about allergic reactions
to equal and opposite
culinary actions.

An ant walking alone across the bathroom rug
an explorer searching to report back
in the desert with no bearings and then
I pick the ant up and break it in two
roll like a snot ball between my fingers
mission failed Pal, send another scout
when I’m not around.

How am I heartless
Me, Killer, and
I reflect
Whose giant fingers
are coming for me,
Dr. Death?

I Lost It All

It hasn’t been a good week
52 in a year
52 years in a lifetime
52 square meals on the mess hall punch card
52 channels, blank screen
52 people in pajamas
not a single one interests me

The original 32 hardheads around
2 horseshoe tables
white members of the board
making grave decisions, taking
action mechanically each day
while defeating thousands of enemies
over a lifetime
several casualties in the fight
are removed or replaced
others disabled resist
some heroes like to listen to radio
others imagine themselves as mere tools
I, however, like your diagonal handlebars
when over my bicycle you leaned
the time I met a lockjawwed heiress
entering a tree-lined street in Paris.

Lines Across the Pacific

“We swim in an ocean of lies . . . to know that your house is built on sand. That’s what makes poets’ eyes twinkle.” (Jay Lawrence Dessner)

Tonga, Yap, Guam, Tahiti
Figi, Java, Hawai’i, Easter Island
Japan, New Zealand, the land of new zeal
I can see them all from here
A small boy stands straining my eyes into the Sunset
They’re all out there, better than Playland, sandland
Better than anything at my back
Better than school where the other kids pick on me
Better than the empty church with its haunting echoes
Better than the library that hasn’t been built yet
Better than sex will be because I will never score
Better than the movies even I know aren’t real
TeeVee neither
Dad calls me back to the dunes
I’d rather stay here
Where pacific worlds emerge
Castles on the deep-gray waterline
Where everyone is kind
Where all the food is sugar
Work slips into a plan
Though there’s never any plan
No yesterday, no tomorrow
No contemplation
No observation
Interconnection
Over the Ocean.

E. Martin Pedersen, originally from San Francisco, has lived for over forty years in eastern Sicily, where he taught English at the local university. His poetry appeared most recently in Avatar Review, Canyon Voices, Slab, SurVision, and Helix Literary Magazine, among others. Martin is an alumnus of the Community of Writers. He has published two collections of haiku, Bitter Pills and Smart Pills, and a chapbook, Exile’s Choice, from Kelsay Books. A full collection, Method & Madness, is forthcoming from Odyssey Press. Martin’s poem, “Gull Eggs,” was nominated by Flapper Press for the Best of the Net Award 2023. 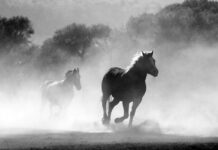