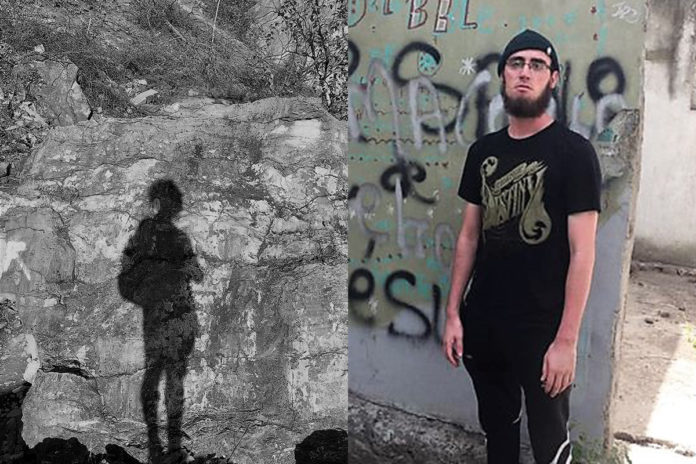 Note: The experimental poems below are accompanied by the poet’s note (in italics) about their style & construction.

I did
live doom
as a
mood evil
did I?

I think “dromic” relates to a racecourse (etymologically, dromos “a running”) and it is part of “palindromic,” which characterizes this poem. As for the content — and this note relates to all these poems — I got diagnosed with a clinical depression in 2014 that has not yet gotten any better. Recently, I’ve found myself having a very fatalistic and pessimistic view of my life, i.e., consigning myself to live out my doom, namely that my depression and terrible effect on my life will not get better; sometimes this seems like an “evil mood,” especially given the societal pressure to reject pessimism, but other times I do not consider it evil because it simply is, a truth without a positive or negative value judgement appended to it (hence the ending with a question mark: I’m not sure how to understand my doom, i.e., fate).

still sleep an inertia
a me lethargy that the cannot
muggy the offers a lethargy
grave. into myself, no an inertia
cannot a I a overcome, silence
pulls of of muggy straitjacket,
rest, of grave. straitjacket, into
rest, me no overcome, that a
myself, I offers silence the of
still sleep pulls the a

In recent months insomnia has complicated my depression. The psychological effects of the loneliness and darkness that characterizes my nights, as well as the effects of sleep deprivation on the following day, perturb my clarity of thought, constraining my ability to think freely (hence “straightjacket”). This all results in cerebral chaos, which is depicted by the poem’s nonlinear, repetitive, abstruse nature. The poem doesn’t end nicely (indeed ending with back-to-back articles is absurd) because my insomnia-beleaguered thoughts so often have untidy loose ends.

The numbers make the word “nameless” in the Latin ASCII alphabet in their binary code representation. I used the binary because I wanted to name, so to speak, the word “nameless” in a way far removed from how we usually recognize names. The depression that commandeered my brain/body/identity in 2014 and continues to distort my self-concept/identity makes me feel like I have had my name — who I really am — taken away from me. Regarding the nonbinary parts of the poem, the paradox in the disjointed phrase “am and am not” is because I technically still am called Connor, just as I was before depression, but depression has changed me so much that I no longer feel like I belong to that name.

Self-help or self-harm, (the selegiline but)
(infinity phantom-faced)selegiline stuck
to something seeking (up in each)
(demonstrates dress exile something rise)self or rest or dreams
of waking up (I monster myself)
(or seeking a self-harm)from a six-year exile
of night terrors (of shivered or)
(night dreams)but demise
demonstrates (obnubilating)
(six-year self)a monster
of present absence, (of stuck without)
(waking existing)shivered phantom-faced
obnubilating (present)
(from rest)the infinity
I dress myself in (of self-help I absence)
(a morning)each morning
I rise without existing. (to demise terrors or)

Selegiline is an antidepressant — one that in the US (and probably many other countries, I’m just not sure about that) is pretty end-of-the-line, meaning a patient usually tries many other antidepressants before this one is used. So, already that speaks to the desperation of the poem’s protagonist (me). At the point in my treatment that selegiline is the option, I no longer know if my use of psychiatric services is a form of self-help or if it is a form of self-harm given that the psychiatric services have not helped me but has continued to give me false hope, take up time, cost money, etc. The form of selegiline I take is an adhesive patch, so the idea in the poem with lines like “seeking self,” “present absence,” and “the infinity I dress myself in each morning I rise without existing” is that I adhere a patch to a physical body but the pathology of my depression makes it seem like my body is not mine (i.e., I have no control over my physiology) or that I simply do not exist (i.e., if my body is not mine, then what is mine, or what then constitutes the concept of “mine” or “me”?). The parenthetical parts of the poem is a version of the same poem with the words randomized because when I feel without a body that I can call my own I feel like some random ectoplasm of energy rather than a human being; the randomization gets at feelings of depersonalization (a symptom of some mental illness in which one has the feeling that one is observing one’s self from outside of one’s body). If I don’t exist, then I probably wouldn’t be able to write a coherent poem, so the parenthetical parts serve to describe that dysfunctional part of the paradox/juxtaposition.

i hate being awake and i hold to suicide.
i hate awake being and to hold suicide i.
being and to. i awake hate i suicide hold
gbine dan to. iawkea heat iediiuscdhlo
olhdcsuiideitaehaekwai .otnadenibg
hnac b hwaedtaidlsaIeieieokoutd i.ng
oihedadasidluctnibeowenhiekagti.a
oieaaiuieoeieai.ahddsdlctnbwnhkgt
o i e a ai u i e o e i e a i . a
o i i i i i .
i i iii.
iiiii.

I wanted to represent the chaotic destruction of suicide: as the poem progresses I used techniques like scrambling word order, then scrambling letter order within words, then scrambling all letters in a line (i.e., no longer can the reader discern the skeleton of the original words), then removed the spaces, then removed certain vowels until only “i” — the last thing, stripped of everything but its essence, that remains before someone dies by suicide — remains.

Connor Orrico is a medical student and amateur field recordist interested in global health, mental health, and how we make meaning from the stories of person and place we share with each other, themes which are explored in his words in The Collidescope, Burning House Press, hedgerow, and X-Peri, as well as his sounds at Bivouac Recording.