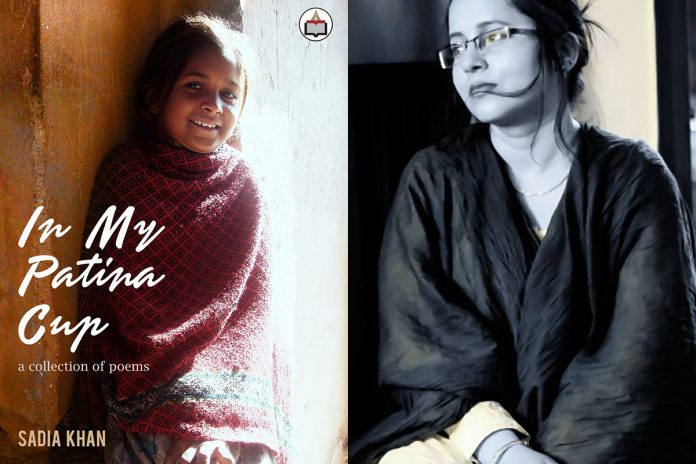 The metaphorical Title of this volume: “In my Patina Cup” brought to mind the gem words of Muriel Rukeyser(1): “Breathe in experience breathe out poetry”, as what, then, is the in-depth meaning of Patina Cup if not the poetess’ breathing out of all what she felt in a kind of empathy on her pulse related to the life and the world in these 57 poems composed and compiled in this compact book of poetry which opens with a verse-epithet from Rumi inviting for tasting its mystical flavor: “And from beyond the intellect, beautiful Love/Comes dragging her skirts, a cup of wine in her hand.” Accepting her invitation of enjoying her thoughts ‘under the roof of silence’, as one starts drinking the poetic ruminations from this patina cup, the poems start offering a description recorded in representing symbols and leit-motifs and metaphors connoting the spiritual quest, the journey within, Ar Rihla:(2)

My body sleeps below the soil

Sighing and marveling at my travel inside,

The frequent use of the first-person pronoun presents, to the reader, the soul, standing ajar, willing to welcome the ecstatic experiences with the intuitive as well as artistic assistance of her muse.Reviewing the book, I noticed that she has a ready Muse, a poetic persona, who stays usually at her beck and call to scribe the notes of her spiritual journey. A persona, from the Latin for mask, is a character taken on by a poet to speak in a first-person poem(3). The Persona in her poetry is like a familiar spirit fetching the pearly and starry images plundered and plucked from the seas and the skies respectively in order to adorn the earthy world she mostly thinks about, in this poetic ‘crop she set fire to’, studying the men and women around her. Her characters are taken not from the fairylands forlorn but the human world of reality, of smiles and tears. Let’s meet her poetic ‘I’ in the present volume:

A warped yarn, with intermittent lies,

To the tune of

Throughout the book, there is a feel of communication, as a tenor, of the poet with her reader whom she does not leave baffled for any of her experience shared in the poems. The book is structured in the hybrid utterance of the poems along with the heteroglossia(4), the Russian version of raznorechie(5). The hybrid utterance, as defined by Bakhtin, is a passage that employs only a single speaker, the poet, for example, but one or more kinds of speech. Here this hybridity is seen in the form of prose comments added by Sadia when she intends to speak in her own voice, for instance, before her poem My Old Bard, she writes:

“A long path I walked in search of divinity, yet which was found as I lay fast asleep in this grave. A mere remembrance of love that I sought, I become! Devoid of pursuit, indeed, my heart is dark and cold.”

Justifying the title: “In my Patina Cup” as the centralized metaphorical narrative, chronicling the life of a woman, with the soul of a traveler, intending the soulful quest, the present volume carries many short and long poems unconventionally set beyond the bounds of any serial number though along with the specific title-heads in which one can easily find the “I” of the Confessional Poetry.(6)Sylvia Plath, a confessional poet clears the concept in the broader level in these words spoken to an interviewer:” I think that personal experience is very important, but certainly it shouldn’t be a kind of shut-box and mirror looking, narcissistic experience. I believe it should be relevant, and relevant to the larger things, the bigger things such as Hiroshima and Dachau and so on.” The examples in Sadia Khan’s work are many but the one specifically taken is from a poem:

If I am of Words

Poetry should be mine,

Then this ascetic lunacy,

Ought to become my spine.

An infidel to laid leeway,

Past this staid, sober world

In my own right!

Sadia’s voice, all confided in her poems, is loud and clear, which, according to her, should be clearer, that’s why she does not wish to leave her thoughts to be interpreted or misinterpreted in the patriarchal society where a woman is more misunderstood than understood, depending upon the whims of the reader, for in another poem, “She has got a lie to Tell”: she herself talks of this dilemma:

The finest thing you can do,

Is to sense her,

And also the nastiest thing is

The reason of such a feel of insecurity lies somewhere in the dual social role she performs like many other individuals of the same society she lives in, she gives vent to her feeling in these words: “I am not these, as you perceive; what you can’t see, I am that.” This duality is not Iago(7)-like diplomacy who claims “I am what I am not…” rather this is the duality of what she really is and what people perceive her to be. She adds her intentions in a hetroglossic comment:

“I am scared of going to grave, unheard, unseen, and never understood…what a plight it must be, to lie there, almost forgotten.”

The present volume carries a variety of topics with ecstasy and excitement, sensuality and sensuousness she selected to scribe on, covering the travels, chase, escape, mythology, history, romance, beauty and nature though she does not take anything on the literal plane rather she dives deeper into metaphorical and sometimes symbolical depths. In a poem: “A Rainbow”, we do not find the expected appreciation of the beauty of a natural phenomenon but as the rainbow itself is a corollary of the bond between the sun rays and the downpours symbolic of pleasure and pain,she wishes to manipulate, borrow, and improvise upon the natural colors of the rainbow in her own way, she wants to paint life by the blend of those festive and melancholic colors:

“I wish to paint a rainbow

Three of life, and

The poem “Ana’al Haqq” is a straight from heart mystical rendering as an ultimate result of the quest:

[He is truth! Soul of truth! <and therefore> I am truth!”

Many of the poems are written in the Free Verse (8)form, along with some poems with occasional alternate rhyming, and rhythm being consistently present throughout the reading experience which she shares like an open secret as her poems touch the reader in multiple ways as the poems connote life. Free Verse medium suits her free-flowing thought strain as this form gives her freedom from the traditional prosodic rules. Some poems like “No More” and “Would you see…” are composed in the Ghazal form with /aa,ba,ca/ structure of rhyming, giving the poetry an oriental touch, as the same touch is found in the eastern, feminine lexical choice like bangles, kohl etc. The poem “Save Me”is densely allusive, profuse with the mythical allusions and the classical references, lending a feel of timelessness to her poetic aura.

The fact that this Patina Cup bears a rich drink tasting of travels and spiritual quests through the alleys of life and world every one of us lives in, entices me, as a reviewer to say, Sadia Khan, in her poems, has not travelled alone but carried her reader/s too confiding in all the secrets of life she felt personally, this is the fact which makes the book a worth-reading experience.

[1]an American poet of 20th C. and political activist, best known for her poems about equality, feminism, social justice, and Judaism

[2]Riḥlah (Arabic: “Journey” or “Travels”) is a Classical Arabic term of a quest, with connotations of a voyage undertaken for the sake of divine knowledge of Islam. It is also a form of travel literature based upon the experiences of the travelers. The term “Rihla” was especially attributed to the written account of the adventures of the Islamic traveler and scholar, Ibn Battuta. Ibn Battuta traveled throughout most of the Islamic world during 1304-1369 C.E., later dictating his account as the Rihla.

[6] the poetry of the personal or “I.” This style of writing emerged in the late 1950s and early 1960s and is associated with poets such as Robert Lowell, Sylvia Plath, Anne Sexton, and W. D. Snodgrass.

Sadia Khan hails from a culturally rich city of Agra and resides in heartland of poetry world – Delhi. Two cities that nurture her bohemian soul which reflects in her work through hints of mysticism and intricacies of Love. Sadia likes to be known for her work above everything else.  Her work has been published in various Paperback and online journals to much praise in artistic communities. She has also been felicitated with “Frang Bardhi” Literary Award – 2014 for her contribution in literature. She is also one of the winners of #RhymeIndia (A Times of India initiative).​