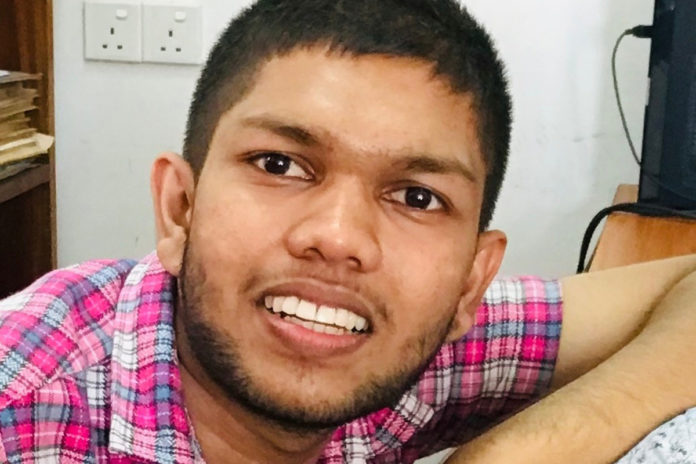 Could you please tell us about yourself, your background, how you started writing, and what you have written so far?

I live in Sri Lanka, aged 26, and am currently attached to the Department of Decision Sciences in the University of Moratuwa. I am academically involved with the subjects of Mathematics and Statistics, and am also interested in such areas of study as Education, Psychology, Management, and Language & Literary Studies. Besides all these, I have always been garnering a passion for English language and literature since I was a very young kid. Whenever I have some free time, I love to read poems, stories, and novels written in both English and Sinhala. I believe that it is my unflinching desire for reading that has been the source of motivation behind me becoming a writer. So far, I have produced poems, essays, short stories, articles, translations and research papers which have been published, both locally and internationally, in various blogs, journals, magazines, anthologies, and newspapers. Although English is not my first language, I started writing in English at the very premature age of 11. I remember my debut publication, an essay titled, A Tsunami Speaks (2005) featured in the Expressions page of the Junior Observer which is a supplement of the weekly Sri Lankan English newspaper, Sunday Observer. I still have that paper with me and it is always a great pleasure to revisit my first publication. During my school days, I was able to achieve a number of awards from many creative writing competitions at zonal, district, provincial, and national levels. It is at the age of about 14 that I started writing poetry, engrossed by the meaningful and enlightening poems that I studied in my English Literature class. Further, I compiled my first collection of poetry entitled, Oasis when I was 16, and to quote from the Introduction to the book;

“Oasis is a volume of poetry the function of which is to articulate the shallowness of manifold moral failures of the human race; to admire the beauties of some spectacular social dimensions scintillating with the density of their fragrance; to scrutinize them through what you may call ‘poetry’ with a clear perception of the ambivalence governing the matters concerned; and to provide the reader with an itinerary to go in quest of the ‘oasis’ instead of crawling into a morally sterile society.”

The poems in this collection were well received internationally and have appeared in publications in countries like Sri Lanka, India, Nigeria, Africa, Canada, the US, and the UK. At present, I am working on my second collection, Reflections of Life, and also on a book namely, A Rare Kind of Beauty, Yet Unexplored:  A Selection of Modern Sri Lankan Sinhala Poetry which involves translations of a set of select Sinhala poems written by some famous Sri Lankan poets.

What contribution have you rendered to the literary world other than writing?

Apart from being a writer, I have also interviewed some of my fellow poets in Nigeria, and I am also interested in writing literary reviews. It is also heartening to note that I have been serving as the Editor of the Chrysolite Writerz which is an organisation for young writers based in Nigeria. In 2016, I  worked as a reader and reviewer for the international anthology of poetry, “Dandelion in a Vase of Roses” edited by the much renowned American poet, Michael Lee Johnson. This anthology came out as a book project by his Facebook poetry group, Contemporary Poets, Their Works, Current Poetry Projects, News, Links.

At what age did you think of becoming a poet? What was the turning point or decisive factor behind the writer in you?

I am still wondering whether becoming a writer was a choice or decision that I made, or whether it simply happened by chance. Yet, I know that I was determined to become a poet after reading some beautiful poems that had been prescribed for study in the English Literature course that I took when I was just fourteen years old.

What kind of an impact did your school years have on your writing career?

In fact, my school years had a lasting impact on my writing career. During my school days, I won many awards from several national and provincial level English essay competitions and creative writing contests. Also, I had many of my creative compositions published in some local newspapers when I was young. Hence, I see that all these achievements have definitely strengthened my yearning to be a writer.

What are the sources of inspiration behind your writing? What enforces you to take your pen or keyboard for creating poesy?

Interestingly, I do not have any set schedules or time slots when it comes to writing poems. I start writing whenever the thoughts knock at my door, no matter where I am and what I am doing at the moment. In case I can’t find a pen, I would type the lines on my phone or register them in my mind. In my experience, writing is an authentic and spontaneous process that involves a natural flow of emotions, and the moment you start forcing your imagination, you tempt to tarnish the originality of your expressions. Thus, the repercussion is a poem lacking in quality and vibrance. That being said, I also have to admit that the muse is not always making her gracious presence around me. Sometimes, she appears abruptly and leaves in a minute so that I barely have the time even to write the first line of my piece, and then I go on waiting for hours, may be days, for her to come back and illuminate my thought process. In accordance with my stance, penning poesy is an experiment of some kind where the writer has to indulge in a sagacious exploration into the particular object, event or situation which has the capability to lend a vigorous thematic richness to the work. Actually, my idea of what poetry is has constantly changed as time passes by with my zealous involvement in writing and my continued exposure into the literary world.

Which poets have you enjoyed the most reading and how have they shaped your literary perspective?

There is a very long list of poets, both local and foreign, that I have enjoyed reading and drawn inspiration from. I highly adore the work of such great poets as William Shakespeare, William Blake, William Wordsworth, Thomas Hardy, Wilfred Owen, W.B. Yeats, Emily Dickinson and Robert Frost. I have further been motivated by the poetry of Sri Lankan English writers like Patrick Fernando, Lakdasa Wikkramasinha, Anne Ranasinghe, Yasmine Gooneratne, and Jean Arasanayagam. Apart from them, I highly appreciate the writings of Sri Lankan Sinhala poets such as Gajaman Nona, Kumaratunga Munidasa, Monika Ruwanpathirana, Wimalaratne Kumaragama, Wimal Dissanayake, and Parakrama Kodituwakku. Moreover, I enjoy the works of such Indian English authors as Anita Desai and Nissim Ezekiel.

Do you have any favourite quotes to share with?

Man does not weave this web of life. He is merely a strand of it. Whatever he does to the web, he does to himself –  Chief Seattle

The heights by great men reached and kept were not attained by sudden flight, but they while their companions slept, were toiling upward in the night. – H W Longfellow

With the advent of internet platforms, what kind of a direction or trend do you think the publishing industry has taken or will take in the future?

With the burgeoning increase of internet platforms, we are presently witnessing an unprecedented efflorescence of creativity on the web. This has hence led to a revolutionary growth in the publishing industry. Thanks to the widespread availability of various digital platforms, anyone from any part of the globe has the opportunity to exhibit their literary talents to a global readership. So, I am of the view that this would be a very positive trend given that concerned editors and reviewers keenly monitor the quality of publications.

What do you think of the contemporary literary scenario in Sri Lanka?

In fact, the public enthusiasm on creative works seems to be a bit dwindling at present in Sri Lanka just like in other countries globally. This has unfortunately led to a downward trend in the emergence of literary works in several genres in English as well as in the two main local languages, namely Sinhala and Tamil. That being said, I am glad to mention that there is a certain set of young literary enthusiasts who are toiling unwaveringly for uplifting and promoting miscellaneous forms of creative writing in the country.

What advice would you like to offer to amateur poets or for those who wish to get published newly?

As a young poet and author, my advice for the amateur writers is to read as much as they can. The more you read, the richer your writing will be. Further, it is quite important to receive constant feedback from your colleagues and constructive reviews from established writers. For those who are just starting to submit work for possible publication, I would like to encourage them to first consider small presses. During the initial phase, you may try blogs, e-zines and e-journals which are willing to publish emerging writers. And, the most important piece of advice would be not to get discouraged by rejections, because I personally know that even the giants in the contemporary literary society get declined at certain times. You may be declined twenty times, for instance, but that doesn’t necessarily mean that you will be rebuffed by the next press in your list too. So, you should never give up. Try harder and harder until you get the wings one day.

Is there anything else that you would like to add?

Yes, I wish to express my sincere sense of gratitude to the team at Modern Literature for creating a podium for writers to express their voice internationally through the medium of literature. Your sincere attempts at enriching the corpus of creative writing are quite commendable. I wish you all the strength and courage to continue this worthy course thus inculcating in the younger generations a zeal for appreciating arts and literature.

Indunil Madhusankha is currently a Lecturer in the Department of Decision Sciences at the Faculty of Business of the University of Moratuwa. Even though he is academically involved with the subjects of Mathematics and Statistics, he also pursues a successful career in the field of English language and literature as a budding young researcher, reviewer, poet and content writer. Basically, he explores the miscellaneous complications of the human existence through his poetry by focussing on the burning issues in the contemporary society. Moreover, Indunil’s works have been featured in many international anthologies, magazines and journals.