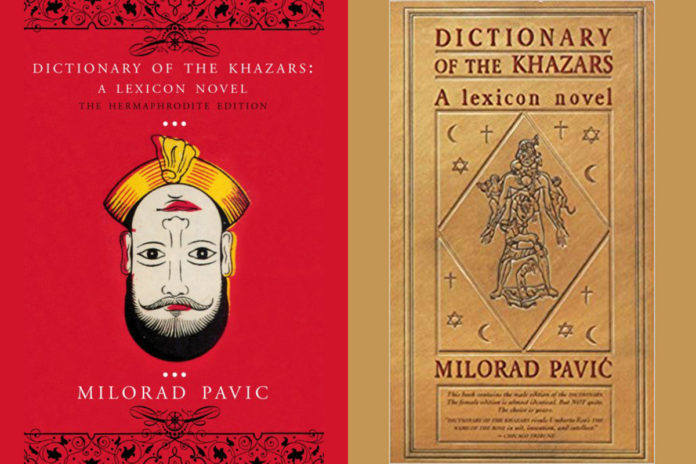 Milorad Pavić’s Dictionary of the Khazars

At times, the progressive spirits of 20th century fiction seemed determined to turn the novel into something other than fiction.  In their opinion, the novel might resemble an annotated poem, a guide to writing styles, a journalistic account of a crime in Kansas, or ruminations on the bombing of Dresden.  It might take the form of a quest to find another novel, or look like a vengeful typographer had unleashed his frustrations on the printed page. But Serbian writer Milorad Pavić may have taken the most extreme step of all in his attempt to turn the novel into a dictionary.

Or, rather, three dictionaries.  His 1984 work Dictionary of the Khazars: A Lexicon Novel takes the guise of three conflicting reference works devoted to a historical event from the late 8th century.   At that time, the Khazars, a Turkic people at the crossroads of Europe and Asia, decided to give up their traditional religion and embrace a new faith.  The specifics of their conversion are clouded in the mists of time, and the Khazars themselves didn’t stay around to tell their own version of the story. They were eventually conquered by Sviatoslav I of Kiev, and disappeared from the annals of history-although some (notably Arthur Koestler, who developed this thesis in his 1976 book The Thirteenth Tribe) believe that the Ashkenazi Jews are their modern-day descendants.

Pavić takes the historical moment of the Khazars’s conversion as the focal point of his book.  He relates that the Khazar ruler first made the decision to convert before he had decided which new religion to embrace.  To settle matters, he invited representatives of Islam, Christianity and Judaism to come to his court, where each would be given the opportunity to present the reasons why he and his nation should accept their creed. Pavić  tells us that later scholars attempted to reconstruct the resulting debate between the three religions leaders, known as the “Khazar polemic,” and their findings were compiled in a now lost 1691 book entitled The Khazar Dictionary. Pavić’s novel is purportedly the result of an attempt to reconstruct that work-which, in its original form, was comprised of three sections, which drew respectively on Christian, Moslem and Hebrew sources.

Did you get that?   In other words, this is a work of fiction that aims to recreate an allegedly non-fiction (but actually non-existent) book, that is comprised of three separate works about an imaginary incident that supposedly took place as part of a real historical event. As if this is not sufficiently complex, The Dictionary of the Khazars (the real Pavić novel from 1984, not the imaginary 1691 reference work) has been released in two separate versions, a male edition and a female edition.

My copy is a female edition, and back before the days of the Internet, a reader who wanted to compare texts with the male version would have been forced to find a copy of it and track down the contrasting sentences-which, as it turns out, are limited to a single paragraph.  Nowadays a simple Google search will lead you to the alternative passages—although Milorad Pavić’s heirs are robbed out of the potential royalties of selling two copies to every curious reader.

I won’t be a spoiler here, but I will say that a comparison of the two passages raises more questions than answers.  Then again, that is true of this entire novel, which may take on the superficial appearance of a reference work, but hardly lives up to the one essential requirement of a dictionary, which is to provide clear, concise explanations.  Instead, Pavić prefers to play the role of obscurantist, spreading confusion, cultivating contradiction, and instilling a sense of mystery into even the most ordinary events.

One of Pavić’s specialty is (allow me to coin a term) the ‘closed aphorism’, short statements or phrases that seem to offer a kernel of wisdom, but actually present a dead end. Any profound meaning must be supplied by the reader, and Pavić will make the task as hard as possible.  Here are some of his closed aphorisms:

“Dreams are the Friday to what in reality are called Saturday.”

“Time comes from the South and crosses the Danube at Trajan’s Bridge.”

“One cannot speak about half the soul.  Otherwise we could keep one half in heaven and the other in hell.”

“All roads to Palestine; none from it.”

Yes, they are like Chinese fortune cookie wisdom from a bad Philip K. Dick novel. And the muddled, mystical tone to these phrases matches the ambiance of the plot, which often takes on a dreamlike quality.  Dreams play a prominent role in Pavić’s novel: the Khazars often turn for advice to their dream-hunters, who have the ability to enter into these nocturnal visions, and even follow in pursuit of a person or object from dream to dream.

Much of the “action” of this book takes place either inside of dreams, or as a result of them.  When the Khazar leader summons the representatives of the three religions to his court, he initiates their debate by asking them to interpret a dream. In the context of Dictionary of the Khazars, this is hardly an innocent request. Dreams can be both daunting and dangerous in this novel, and a dreamer might be caught permanently in a dream from which no awakening is possible. Even the actions of the waking life might be controlled or influenced by someone else’s dream.

The plot here resolves over the course of more than a thousand years.  Like a few other novels with such expansive chronologies —such as Cloud Atlas or Gods Without Men—Pavić plays with notions of eternal recurrence and synchronicity.  Much of the meaning here is subject to debate and discussion, but behind Pavić’s often cumbersome mysticism, real hard-nosed issues loom. What happens when different cultures try to appropriate the same historical narrative?   How is personal and national identity shaped by allegiances to different brands of metaphysics? Above all, how do conflicts between belief systems manage to defy the law of entropy and maintain their heat (and, often, attendant violence) century after century?

Pavić does not have ready-made answers to these questions. And, despite the fact that the characters in this novel are always ready to offer grand pronouncements and visionary solutions, I doubt that Pavić saw that as part of his mandate in writing Dictionary of the Khazars. The end result is a dictionary where almost everything is left undefined.  Oddly enough, much of the charm of this peculiar book derives from that very paradox.

This review originally appeared at http://fractiousfiction.com/dictionary_of_the_khazars.html 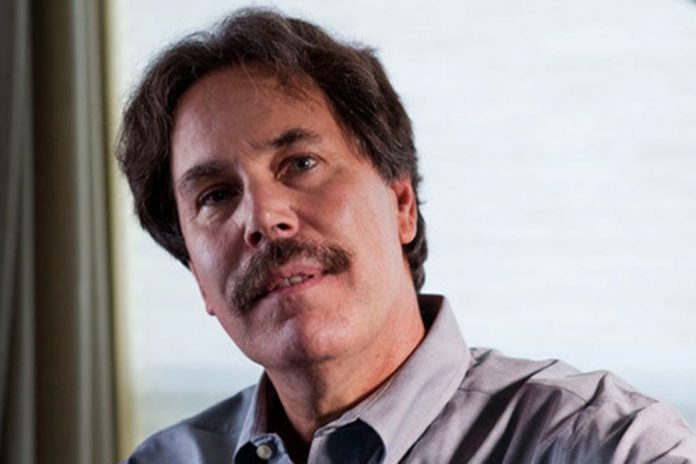