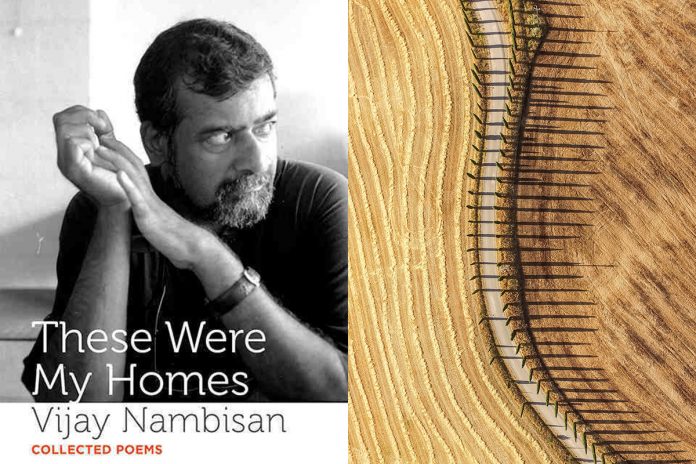 To call Nambisan ‘the finest poet of his generation’ is now becoming something of a cliché. In the Bombay poetry world to which he belonged, he was somewhat unregarded because he was a quiet presence lost in a world of words, but he was the first to win a major and distinguished award, the All India Poetry Competition organised by India Poetry Society and the British Council, in 1990.

Many of his poems dealt with his lifelong tussle with the political scenario – but ended up gently poking fun at himself.  He was unsettled by what he saw around him and sought ways to express it, whether by references to the Bible or to other traditions though there was always a deep sense of compassion underlying it all. Idealism and reality balanced themselves in his work though he was a man who gave up a bright future at the IIT to lose himself in verse. Possibly this was because he needed to delve into the innermost recesses of his being and an engineering career would not have allowed him to do that. He called it a space where answers were not always possible in which he knew himself as ‘unliving and unafraid’.

At one level his verses have a childlike simplicity about them and he has a poet or a child’s clear vision that enabled him to cut through pretension and opportunism. He could talk about how radium has its own soul and decays a little bit at a time exploring the metaphysics of science as he once did of crystal,  or evoke the voice of a prophet – his imagination allowed him to inhabit all kinds of being. He also translated works from Malayalam – Poonthanam’s Jnana Paana – with equal cadenced vision, gently criticising Sanskrit’s demand to be regarded as the superior language. But then it was part and parcel of his disdain for the suited, booted people and those who are called the ‘corporate poets’.

He felt that at the core of it all lay integrity, the truth of the poetic vision. Not the images or even the words that he used with such fluidity. Without truth, language becomes a political tool, or so he felt, harking back perhaps to jesting Pilate’s, “What is truth?”.  More importantly, in the current scenario, the inability to confront the truth gives way to the kind of delusions that are aired on social media with alarming frequency.

There is music in his work, rhymes and cadences that evoke earlier classic English poets but which some might say were not true to the essential Nambisan who prided himself on his economical usage of words. The poems in this collection follow the trail from the womb to the death bed with meditations on duck’s feet, cats arching their backs and human mortality.

For him poetry was a cause and it was inseparable from his way of living. Ultimately his system could not put up with the demands that his imagination made on it. These Were My Homes bring together his work for those who knew and admired him and those who did not and are yet to discover him. The past tense is telling because he no longer inhabits those homes. Rukmini Bhaiya Nair has given a perceptive introduction to the poetry collection.

Some poems from the collection are reproduced here:

The Miracle of the Pomegranate

In the August rain the flowers are changing
The shape of the tree. It was light and airy,
Holding its colours high above the earth, arranging
For itself a crown with sure fingers. Now rudely laden
With miracles, it regards the wetness below.
Fruits swell in crimson and yellow, strange
To pluck from grey air. Is there nothing else to do
But life must poke its secrets up through the shoots,
Up past the leaves and into the flowers,
Filling them slowly as if trying on gloves;
Nothing to do but after the merest shower
It should be thrusting earth aside with green plumes
Simply to put the tree in proper perspective—
unwanted things coming again and again to birth,
Ignoring the fact that the gardener’s due tomorrow.
He’ll mutter to himself, Nothing useless nothing wasted,
But the tree’s grown so tall that half its prizes
Will only come to the wasteful bats and thieving
Squirrels, then be left to lose their colours, rotting,
Laying the secret bare to be sympathized with.

Death of a Terrorist

The streets are hungry for the night,
From the sky they claw the red sun down,
Dying dripping on shopfronts and stones, avoiding
People’s faces. The stains will fade. We walk
Hands in pockets, defining a silent road
Through black and grey crowds that give us room.
Moving west and moving a frontier with us,
Telltale hands in pockets because we are spies
And the Moon and Saturn are complex on our palms.
The long stares touch us, feel our shoulders, slip
To our feet, hushed upon the fall. Looking
Not to left or right, we find spaces in the throng.
The next streetlamp glows bright and hard. The day
Is given up. They gather round the fallen
Faultless in the dark. They draw apart for us.
‘Is this the body?’ ‘It is.’ Looking down,
We bring out our hands slowly, no suddenness,
And move our pocket handkerchiefs across dry lips.
The process is rehearsed, deliberate. We return,
Conscious of the things that love us. Think of nothing else
—But in a land that hates us so, shall we starve
Our feelings? Our eyes look not to left or right.
On the hills to the east the sun’s last glitter
Fades

Smell of Things to Come

A nose is a nose is a nose. Who knows
Those fibres of smell better than I? The scent
Of a book that grows on me, of a rose
Withered by fondling, of newsprint, of drink
Untasted but soon to be consumed, of course
I know them all and know too the gross
Odours of unwashed flesh, of dirt
Shed or retained by skin, and I know almost
The scent of love, because sometimes it flows
Between breast and breast, and my nose
Has nestled there.
When blows the wind above
My senses, I have smelled the clouds grow
Against the sky. One scent remains to know,
The last breath I shall ever take as I.