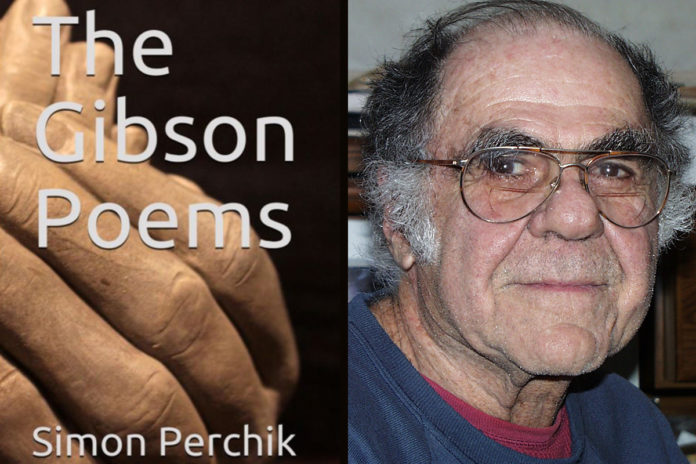 The Gibson Poems ( By Simon Perchik ) : The 216 poems in this collection were written inspired by 216 photographs in the collection titled Deus Ex Machin by Ralph Gibson published by Benedict Taschen (1999). The Gibson Poems has been receiving wide acclaims and appreciation from across the literary world.

The below interaction with the poet serves to understand his poetic world and how the above poetry collection was constructed.

What motivated you to write these poems based on photographs?

I found the photograph a perfect foil to confront with a disparate image or idea (from myths or science) and then resolve the two conflicting ideas or images. This process is set forth in greater detail in my essay Magic, Illusion and Other Realities.

“To uncover this hidden idea for a poem the writers each have their own unique method. As for me, the idea for the poem evolves when an idea from a photograph is confronted with an obviously unrelated, disparate idea from a text (mythology or science) till the two conflicting ideas are reconciled as a totally new, surprising, and workable one. This method was easy for me to come by. As an attorney I was trained to reconcile disparate views, to do exactly what a metaphor does for a living.”

A photograph presents a constricted impression of reality. How did you ensure each one of your poems in this collection fly beyond the boundaries of the photograph upon which it is based?

The poems are not accompanied by the photos. Was this a conscious decision?

Yes. Because they are now irrelevant.

Did you ponder deep over each photo to write a poem or did each photo just provide a creative spark that let your creative thoughts wander without limits?

I ponder but not over the photo or the myth (or science) but over what has one to do with the other.

The poems are not titled. Any reason why?

My work is a bit abstract which by its nature has many facets, often conflicting. A title might steer the reader toward one to the detriment of the others. Besides, titles are for royalty,  not me.

How would you classify the poems in this collection ( if at all you wish to categorise them) – surreal? abstract?

I would use the word “abstract”.

What was the role of your real life personal experiences in crystallizing these poems?

Well, as a lawyer who spends his time reconciling irreconcilable differences the process was a natural.

How has been the reaction of the reading audience to The Gibson Poems?

Perhaps the best testament to your question can be found on the unsolicited reader reviews posted on Amazon. All the reader reviews were given 5 stars.

As one reviewer put it:”Simon Perchik is not a discriminating poet. By that I am saying there is no snobbery to his work. No conscious choice of what gets into a poem or what is left out. He does not discriminate, so all things can feature: (dust, rags, ice, hands, paper…). He picks up on so-called insignificant objects and folds them into the depths of human experience. – Susan Tepper

“…. Perchik’s poems transform from moment to moment through acceptable irrationalities as a doorbell “smelling your sweat,” or a bed sheet that becomes “the stream pouring from each stone fountain.” Each moment of reflection finds an adequate anchor in an enlarging image and which in turn yields another reflection and so on until the resolution finds itself in what one can only call an exaltation of pure imagination. – Michael T. Young, Triggerfish

“This collection is an elegy to life – savored, enthralled, chronicled and passed to us. I am grateful to have read it.
These poems should and will outlive us all.” – Lucinda Kempe

Could you please briefly share with us about your future literary project(s).

Cholla Needles Arts & Literary Library will publish my The Walter Rosenblum Poems in 2020.

A poem from the collection: The Gibson Poems

is washed, held face up
and no longer closes
so what stays on your lips

as if it once could lift
and room growing from flowers
not yet in your mouth.

Simon Perchik, an attorney, was born 1923 in Paterson, NJ and educated at New York University (BA English, LLB Law). His poems have appeared in various literary journals including Partisan Review, Poetry, The Nation, and The New Yorker.