My strong belief is that
such a man did exist.
Yes, there existed such a man.
Or,
how could I be sitting
on the seat behind the door
of the State bus passing that way
thinking of him?
How could there be such a street
buzzing with shops on both sides
moving so rapidly?
How is there
a shop of oranges
jutting into the road?
An old man in a cap
selling oranges?
A woman at the bus shelter
wearing a yellow sari?
Two girls wearing dark blue uniforms
that I didn’t like and
always made me sad?
I used to check the time
as I passed them by.
Sharp 5:46 pm that day too.
My mobile phone rang
without a stop.
I ignored it because
I was so empty.
How did the same call come
today too?
Why did I ignore that call
like then?
Am I not passing this way
for the first time?
Then how are we together
through one dream
and one life?

I desire to commit suicide
in the most joyful manner.

Dragging myself up the peak
of a snowy mountain and
freezing freezing.

Smelling the yellow flowers
nurtured with care and breathing in
the pollen to the brain.

Rolling within a bubble
rainbow coloured and
suffocating to death.

Breathing in the dust from
a favourite book and
sneezing sneezing.

I dream all this from time to time
and become happy
only to recall them again and again.

May be,
the girl you saw in your dream yesterday
who committed suicide so beautifully
was me.

It was during that journey
that he was lost for the first time.
Even as I watched he dived into
the crowd on the platform like a sea fish.
It was after this that railway stations
found a space in my nightmares.

***
I lost him again in the patio
of frozen feelings.
There were no seats there.
He demanded a share of my dreams that day.
I paid attention only to the
white spots on his toe nails.
His life was numbered.
My eyes turned moist.

***
I know that he knows that
I am a bloomless plant that
makes its way to him whenever
I am separated and abandoned.
Only to be abandoned again and again.
Why must I cling to a place
where there is no moisture?
No, my belief is that the seasons cannot
pass by without touching a plant even once.

***
He came and sat at the other end
of the bench on which I was seated
and snarled, “ You are fit enough only
to fall once I get up from here.”
I suddenly remembered that I was
sitting at the other end and
had not fallen till then..
I looked into his shining eyes.
They narrowed down like something wild.
A fear began to grip my insides.
He stood up.
It happened exactly as he said..
I fell. 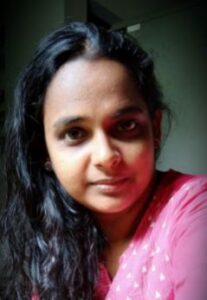 Born in 1988 in Manjeri in Kerala, Vidya Poovancheri has published three collections of poetry  ‘ Neela niramulla verukal’, ‘ Ammini’ and ‘Elankoor 676122.’ She has won many prizes for her poetry. 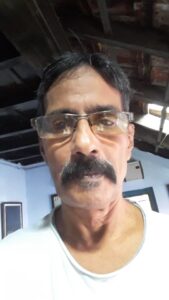