I Love the Night-Time

I love the night-time, the stillness, the quietness,
the painted silence, punctuated, by vital sounds,
of clocks, of heating systems, of barking dogs
of meowing cats, of cars, on the roads, of planes,
in the skies, of wind and rain, of thunder, of lightening
and of hailstones, depending on, the prevailing moods,
of the seasons.

The endless, eternal blackness, over the rooves,
of the houses, when, you look, out the windows,
the eyes, adjusting to the darkness, the pupils,
dilating, until the passing clouds, can be,
clearly seen, traversing through, the night’s
globe, giving a strong indication,
that change is happening, that seconds and minutes,
are changing hands, and that, after, will never again,
be before, exactly, as it was, all time, being unique,
and special.

The air, fresh with silence, dripping with darkness,
slowly punched and punctured, with the sounds,
and triggered memories, of early morning,
in the darkest hours, before sunrise and sunset,
in late Spring, when the sun rises and streams,
golden and silvery beams, igniting the horizon and the tips,
of the trees, and the blades of grass, creating a glorious sheen,
upon the dew, if caught, in time.

Passed the college, on an electric bicycle, in a vivid dream,
locked it outside, facing the staff entrance, cycled home,
without a trace, of any vandalism, swung round the roundabout,
felt like, something was missing, tried to match, the saloon car,
with electrified speed, could hear, the battery, burning rubber,
watched the fight, ended up, in it, got some hiding, bruised,
close to twelve o’ clock, a large crowd, waiting, for taxis,
bag went missing, no one knew anything, a full holdall,
the contents, of a treasure chest, moving, to let others, into seats,
standing, on your neck, for a photo, though you were, nice to him,
he abused it, humiliating bullying, calling it out, expectations,
of betrayal, then it happens, vicious cycles, circular realism,
confirmation of biases, there were no weapons, to be seen,
the inability, to inflict, obvious pain, on the other, the agony,
of impact, broken plastic, beer glasses, lying back, on a Stanley-
knife blade, the meaning, through which, it is read, a level of fear,
to break beyond.

Stretching for miles and miles,
beyond what, the eyes can see,
ordinarily,
passed the horizon, of richest greenery.
The tracks, overgrown with grass,
and weeds, the steel discoloured,
almost patinated, the wood, beaten,
from the elements and the unforgiving
sunlight.

Two strangers, walked hand in hand,
down the line, until they disappeared,
a carriage passed by and disappeared too.
It was old, of antique wood, unvarnished,
carrying cargo, like in, the old west.

Coming back, to the moment,
the wind whistled, through the bushes,
and hedgerows, the leaves, and the trees,
the wildflowers and the weeds.

The absence, had brought newcomers,
that had settled here,
almost, as if,
reshaping the structures,
compensating, for the loss.

The Cheshire-cat smile,
the tightly,
groomed hair,
the skin,
soaked in sandal-wood,
and alabaster.

The beard trimmed,
the hair dyed,
the locks, cut to,
medium-length,
the picture,
of health and happiness.

However,
the redness,
in the whites,
of the boiling, brown eyes,
told a very, different story,
entirely. 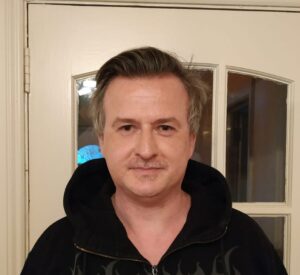 Gavin Bourke grew up, in the suburb of Tallaght, in West Dublin. Married to Annemarie, living in County Meath, he holds a B.A. in Humanities, from Dublin City University, an M.A. Degree, in Modern Drama Studies, and a Higher Diploma in Information Studies, from University College Dublin. His work broadly covers nature, time, memory, addiction, mental health, human relationships, the inner and outer life, creating meaning and purpose, politics, contemporary and historical social issues, injustice, the human situation, power and its abuse, absurdism, existentialism, human psychology, cognition, emotion and behaviour, truth and deception, the sociological imagination, illness, socio-economics, disability, inclusivity, human life, selfishness and its consequences, as well as urban and rural life, personal autonomy, ethics, commerce, science, grand schemes and the technological life, in English and to a lesser extent, in the Irish Language.