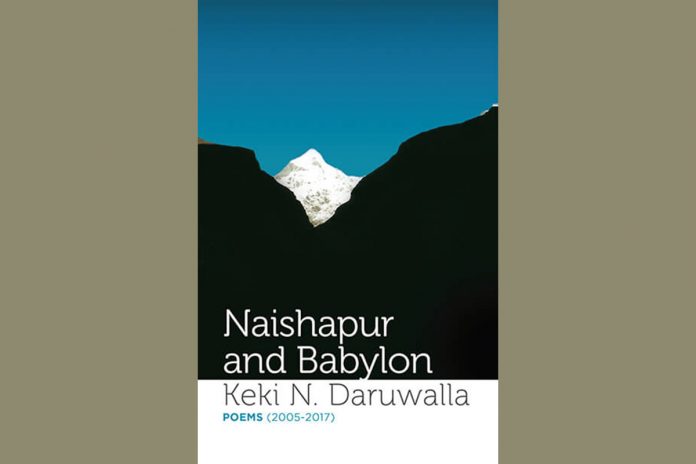 Despite the Machine Guns

The warped image of a kingfisher in the water – at least it is a bird, at least there is water. Keki Daruwalla once confessed that in these times only politics can force him into poetry. In 2014, he gave up his Sahitya Akademi award(1) as a protest against right wing fundamentalism that led to the death of the scholar MM Kalburgi. His poems now lament a splintered world where the bird is a fragmented image of something that was once whole.

Daruwalla takes his title from Omar Khayyam and puts together a collection of reflections on mortality, and marginalization taking his contrast point from Greek prophets like Tiresias or the quotidian Naropa who heard bird calls by never the call of the soul. Against this is set the  troubles in modern Iraq and the problems of women left behind by the husband’s pursuing higher aims – even though the example again is that of Naropa, Daruwalla points out that words like dharma are now ‘dangerous’ because the world has made them so.

What was before just a season has possibly become a season of decay that has to be exposed and Daruwalla feels that the only way to do it is by evoking the past and its mores. The collection spans the vast universe of his library covering fallen kingdoms of Egypt and ancient Persia, not to mention references to Pasternak through Doctor Zhivago, the wolves baying in the Siberian winter outside the candlelit house of love. Recollections of TS Eliot are inescapable – not just in the evoking of Tiresias but in the themes of grief, loss and death.

Daruwalla always remembers that the wolves are at the gate. The question is how does one fight a world in which the predators are growing and trigger-happy goons are toting machine guns while ambulances scream? For the poet the only refuge is imagination but that too for how long? Through the twists and turns of history and the passing of its tyrants, poets and artists have sought the same pathway to try to make sense of what seems senseless. Ultimately nothing is but what it is not.

Birds and their flight patterns proliferate; in fact Daruwalla’s favourite images are those of birds, the blue jay, the eagle, the kingfisher and the falcon. They bring messages from heaven to earth, protest at Tiresias’ alteration of an omen and to Daruwalla verse is like the freewheeling flight of the falcon. Typically he prefers the beak and talon kind of bird rather than the gentle ones – the birds in this book are raptors for the most part which compete with the violence around them. Even though  Naishapur and Babylon was put together without any particular theme in mind, the ones chosen are muscular in message and it is Daruwalla’s preoccupations that dominate no matter the time frame in which they were written. This is a dangerous world we live in where everyone grasps at fragments of the truth and the grudging realisation of age and frailty is beginning to creep in as the wind whets its razor against the rocks and the metaphors make their mark on the mind of the reader.

Here is a poem from the collection:

I am at different places,

seldom at home; but often

even when the place is strange

I think it is home.

Time and place get mingled—

the year may be a stranger

but I feel that we have met.

Then time switches on its

and I feel the draft;

it switches on its shadow-light,

I don’t spot the borderline

between eras, yet I can sense

the rain of the past drumming

on the roof-tiles of the present.

About the poet/author & the reviewer :

Keki N. Daruwalla is one of India’s foremost poets and writers. His ten volumes of poetry include Under Orion, The Keeper of the Dead (winner of the Sahitya Akademi Award, 1984), Landscapes (winner of the Commonwealth Poetry Award, Asia, 1987), Night River and The Map-maker. His first novel, For Pepper and Christ, was shortlisted for the Commonwealth Fiction Prize in 2010. He was awarded the Padma Shri in 2014. Most recently, he was honoured with the Poet Laureate award at the Tata Literature Live! Mumbai Litfest, 2017. His work has been translated into Spanish, Swedish, Magyar, German and Russian.

Anjana Basu works as an advertising consultant in Calcutta. Apart from seven novels to her credit, she has had a book of short stories published by Orient Longman, India; the BBC has broadcast one of her short stories and her poems have featured in an anthology brought out by Penguin India. She has appeared in The Antigonish Review. The Edinburgh Review and The Saltzburg Review have also featured her work.