The insulted corpse spoke to me at night:

Can’t you see what’s planted in my hands?
Definitely, this gun isn’t mine.
I do not recognize bullets,
except the one that pierced me.
Those diary entries aren’t mine,
the hitlists were appended later.
Though murdered, I’m not a dimwit.
If so,
even I want to see the hellish diary
that added our names into the hit list,
a diary that vanished
because it was never written.

After death,
I came to know from the rotten,
decaying, withered,
powdered and wounded corpses
about the guns that were planted
between their dead fingers,
about the insult thrust upon them
by exhibiting their gun wielding pictures,
about romantic diary notes
that were written in their names.
Corpses don’t lie.
We are the truth, the sole truth.
But what can corpses do?

We can.
Even if we are erased from days
and appended to newspapers,
bulletin boards and
lazy after-dinner miniscreens,
even if our lifeless recline
is repeatedly insulted,
our blood silently appears
in honest mirrors at night.
Pressing the lips
against every ear that is awake,
It will chant this till sunrise:
Do not sleep.
What dawns is your turn.

Note: At any place, any time, those despised by the regime are denied justice and wiped out in encounter killings. This poem is a response to such a homicide.

My Name is Hiroshima

My name is Hiroshima.
I am Nagasaki too.
Vietnam, that’s my other name.
Iraq, even that’s my name.

He says,
past, present, future
earth, sky, abyss
wind, sea, ship
vineyards, oilfields
dream, hope, belief,
all of it should belong to him.
The breath of universe
should belong only to him.
Displaying an entry ticket to hell
he says,
Dollar is the synonym of God.

Conjuring
the broken heart,
peeled fingers,
melting soul
and the pain of cancer
into a paper plane,
I resist him till the last breath.

God of the Poor

God of the poor has the face of a joker. The diseased among Gods.

Other Gods killed its people, seeped poison and feces into their wells, banished them.

God of the poor watched, defenceless.

Its people starved and were born ugly. The bread and water offered by United Nations appeared on television screens for them.

They suffered mass killing at certain places. Their oil, rice and reserves were plundered by the murderers.

Its people wore the uniform of soldiers at the borders. As cancer patients, they sat near polluted rivers. In lands where they sold water, they were sold back colored and hazardously sweetened water.

Its people lost in all protests they waged. Their flags lowered, flown at half-mast.  The landlord and the feudal that they executed, resurged as the thousand-headed Abkari who continued to rule them.

God of the poor was helpless. It grasped with its hands and tried to stand on its weak legs. Alleged to be a tribal, other Gods smashed its pots and plates. It was brutally manhandled by the police, false cases were registered. It was robbed of all its forests. Its beaches were sold to mineral beach-sand miners. Its grasslands were sold to tourists.

God of the poor witnessed it all with a sunburnt face. An eternal joker, a depressed immortal, an answerless query, an emotion sans language. No one prayed to it nor celebrated its birthday or festival. No one even remembered it. It didn’t even have a name. It’s because

it was the God of the poor. 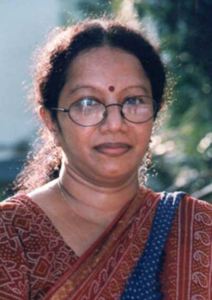 Vijayalakshmi was born on August 2, 1960 at Mulanthuruthy village in Ernakulam district. She has published numerous poems in Malayalam. She was a member of the Executive Committee and the General Council of Kerala Sahitya Akademi. She has also held various other posts in the Akademi, such as its Advisory Board Member and the Convener of its Publication Committee. She also served as Vice President of the Samastha Kerala Sahitya Parishad. Many of Vijayalakshmi’s poems try to establish gender equality and question the dichotomy on women. Literary critic M. Leelavathy lauds the concept of feminism in Vijayalakshmi as a continuation of the feminism of the Malayalam poet Balamani Amma.