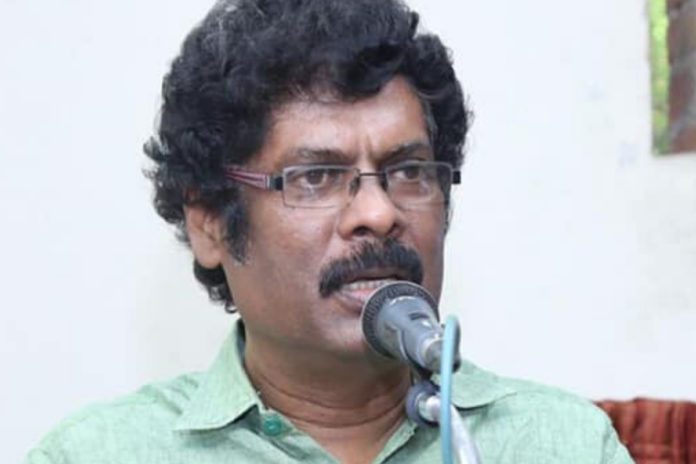 How much space
do we need
to construct a playhouse?

A courtyard corner,
the base of a cashew tree,
a few twigs,
palm leaves.

How many truckloads of gravel
do we need
to construct a house?

See
the sunbird
constructs its house
in the dwarf white orchid tree
in a haste
without a plan or estimate.
Precisely,
as per the secret instructions
of God.

Grieved by the monsoon
that refused to shower,
the crippled crow told
the squirrel on the jack tree branch:

Let’s go buy some rain.
Where? The squirrel quipped.
Wherever, retorted the crow.

The squirrel scurried and
the crow flew
across seven seas and land
to arrive at a place.

There,
shops and markets that sell rain
hyper and super malls
that sell a variety of rain.

By the time they returned,
the monsoon had left without showering.

As the squirrel’s one kilo rain
and the crow’s two kilo rain
was about to shower,
the winter that came
in the vacancy of monsoon
did not allow this to happen:

This is our time.
Rain only during the rainy season,
winter yelled at the squirrel and crow.

The depressed crow and squirrel
struggled to find a reservoir
for the rain they hauled from afar.

The garbage that had piled up
on the streets of cities and villages blared:

The mirror spoke:
You look at me
to see yourself.
Your mannerisms,
smile, expressions
I laugh; covert, hush.

How unbound,
your love for yourself.

Your angry self
never came into my sight
lucky, you have never
seen your true avatar.
One day I shall expose
the multitudes of you
preserved in my deeper
layers. That day, you will
cease your me-ness.

Sebastian is a noted poet in Malayalam. He started writing poems from his school days.  He won the SBT award in 2006, Yuvakalasahiti Deerapalan Chalipadu award in 2009 and Mullanjezhi award in 2012.