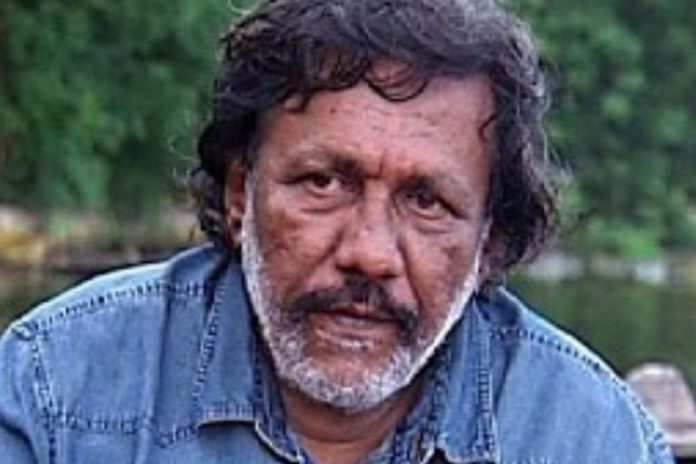 When I gobble embers from
the stove where words burn,
what blooms, friend?
An accidental hibiscus.

We shared blessings and sin
in a long lost December.
Became the force of a hurricane,
panted to sleep in an embrace.
Staying awake at night,
ideators set off on a journey.
We recited ordeals blended in tears.
Seagulls flew away with the past.
Desires became a burden.
Through summer streets we wander,
knock on bolted doors.
A sun quenched by the war
glows in me
as I walk alongside a rejected dream,
its face bruised
by a fall in the courtyard.
Weeping, you plant
the burning question in me.
Where do we seat
the child gifted by Chingam?

A plank of thorns to seat the kid,
nightmares to feed and adorn him,
scorching heat of heart for him to rest,
accompanied by lullabies
set to the tune of poverty.
He will grow alongside truth,
will shape his weapons from wounds,
will weaken his father with queries,
will hunt alongside friends.
What answer
for the scorching heat of those days,
for the mothers of those times!
When I gobble embers from
the stove where words burn,
what remains to remember, friend?
Afternoons, black as crows.

The bar is just about to open.
The intellectual, teacher, magician
introvert, orator, beggar have just arrived.
Silk smiles from the wall.
The bar is not yet in full swing.

Till the dead electricity resurrects,
we are the ones trapped in an iron cage.

The fan grinds to a halt.

We might drown to death in sweat.
What if this lift isn’t operational ever gain?
The termite of fear ascends from the foot.

Suddenly, you stomp and crush my foot.
Shivering, I stay close to you.

We pretended to be strangers
while entering the iron cage.
But caught in the trap of death,
we recognize each other as humans.

Born in 1955 at Kureepuzha, Kollam, Sreekumar has represented India and Malayalam poetry in many venues, including the Afro-Asian poetry conference for young writers. He has read his poems in many universities across India. He has won many awards, including the Kerala Sahitya Akademi award.