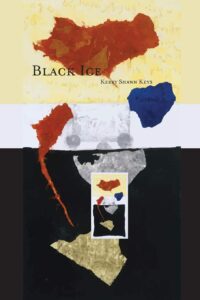 Kerry Shawn Keys, poet, playwright, translator, fiction writer, and children’s book conjurer, has been a globetrotting troubadour of Rabelaisian proportions for more than 50 years—from the rural mountains of Pennsylvania to India to Brazil to Lithuania—collecting along the way several Fulbright Grants, an NEA Grant Literary Fellowship, the Poetry Society of America Robert H. Winner Memorial Award, and numerous translation awards while managing to publish upwards of 50 books.

His newest poetry collection Black Ice is a metaphor for a mirror in the title poem in a book probing the black holes of identity, the claustrophobia of self, and managing somehow to transcend both in a work both lucid and dense, cosmic and intimate, and any number of other opposing forces you can slip through the black holes of exquisitely-made poems.

We like our poets to be knowers: jugglers of myths, legends, fairytales and nursery rhymes; students of botany, ornithology, and zoology along with their magical counterparts, witchcraft, astrology and divination; as well as masters of poetic craft and tradition; and clearly these poems are products of tremendously wide study as well as deeply magical and often surreal thinking.

The most surreal poems tend to the nightmarish but often leave us with a sense of shadowy clarity reminiscent of shaman dreams, the visions of Black Elk, for instance; while the most lyrical have an almost unbearable sweetness of innocence, the wounds of lost childhood or love—the beginning of the book locked in the dark of painful self-awareness, the end in the heartbreaking light of the speaker’s momentarily timeless children, lost in laughter and games, and his own lost loves found in the timeless tongues of poems.
Poems of provocative, surprising, and often beautiful language:

discovering in the stars the larvae of Lascaux (“The Creature”)
the mind’s
midnight mined malignant anthracite, (“Black Bag”)

Or the beginning of “Birds”:

There are birds everywhere, feasting on my days,
on every windy sill and angle, solid as steel
in their still geometry, or unreal as gossamer
and Spanish moss when they flit lazily about the trees…

and the grass that grows long in the evening and fondles the icy stars,
lies damp in the dew in the morning, asleep on the earth
and the silver birch across the way weeping in morning’s coral sunlight,

Or the mountain invoked in “What Does The Mountain Care,” beginning:

Her halo inhales too many harpies into its orbit.
She turns her face but where is her heartbeat.

and ending with a bird-watcher’s testament:

I saw one once while out on a count—the sky momentarily cleansed
to an anti-freeze blue by a snowstorm—I saw it
in the stratosphere of forests that on the other side almost reaches
down to spawn in the darkling, close-webbed mist of the sea.

Or the playful poem, “Pebble” that begins
Perhaps it was such a pebble
with which Cain killed Abel.

Or the light lyricism of “Flowering” that opens:

Tree of Life: we left your benevolence
for all of this Beauty
dying around us

Or the end of a funny little poem devoted to the astrological calendar called “Circuit of Animals” that momentarily resolves the struggle of self and other:

Swimming together
we come apart.
Parted, we join.
You and I
bound and boundless
in the delirious
secret prisons
of ourselves.

And two sonnets (because I am partial to sonnets):

I know very little of the Hoffers, Helvetian half-mast ancestors.
I know they were mountain goats and masons and not farmers.
Their mission was mortar and stone, not dung and fodder.
They spoke a language heavy like stone, a marbled tongue,
granite and limestone mixing guttural Bach with Palatinate,
Deitsch, Appalachia, jugband English and Scots.
I don’t know much more about them other than
that they were like my father, all of them orphans.
Their fathers and grandfathers, also doubtless, itinerant orphans,
persecuted in their homeland to be rebaptized Pennsylvanian.
Who knows, indeed, what happened to any of them, simply gone,
as all of us sometime, inhabitants of a dollopy land called Oblivion.
Though now and then they occupy my mind, craggy phantoms
building dry stone walls through the quicksand of my poems.

A deer bounding across fern and lupine,
fearful, escaping unveiled into the twilight.
I could write poems for her, naked poems, patter
on leaves, nostrils flared, white tail bobbing,
barbwire fence with patches of fur left behind,
the seven holy points of her totemic mate’s horns
racked higher than pity or regret in my living room.
That’s not what my life now wants or ever did.
I still hope for an almost ‘still-life’, given, found, not rigged,
not an hourglassed natura morta or our Pieta on the run
even if the destination were immortality, Heaven or beyond.
I want her here close to me, earthly, fearless, nuzzling the air,
closer than life or death, downwind, ears eased downward,
staring, staring through, deep brown eyes, both of us beloved.

The compression of travel and time makes Black Ice a surprisingly big book in its 73 pages, varied and complicated, full of mystery and surprise, as an aging poet comes to terms with death and eternity with the skills and grace of a master. 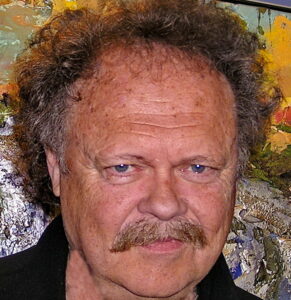 Michael Jennings was born in the French Quarter of New Orleans and grew up in east Texas and the deserts of southwestern Iran. He graduated from the University of Pennsylvania as an undergraduate and Syracuse University as a Graduate Fellow. He is the recipient of many awards including Central New York’s Best Poetry Book of the Year and The Missouri Review’s Miller Audio Prize awarded by Vijay Seshadri. He is the author of 13 collections of poetry, most recently Summoning the Outlaws (2018), and Where She Dances, The Moon’s Children, and The Dark Mothers (2020).