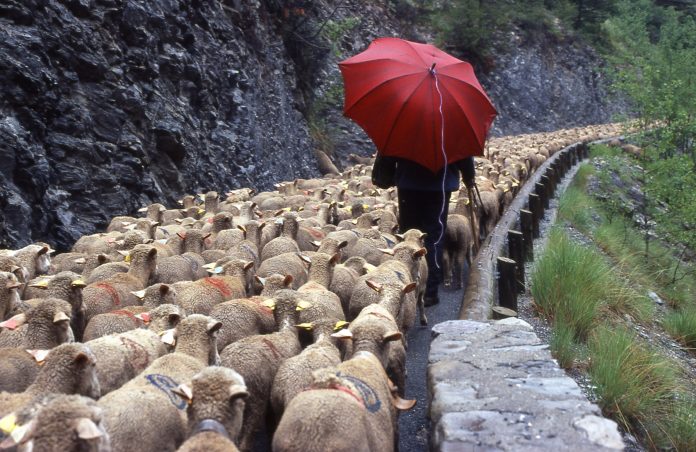 (In this beautiful memoir of a life lived in and through translation, Mireille Gansel defines the process of bringing words from one language to another as a kind of seeking, tied to the land. Transhumance refers to the seasonal movement of a shepherd and his flock to another land, or humus. It is the opposite of settling and farming: it is a form of nomadism, a search for richer grass, and it provides an apt image for her own trajectory as a translator) (From the Foreword by Lauren Elkin)

Aunt Renée’s eyes look as if they have been hewn from the crystal blue of twilight. This silver-haired elderly lady is one of Grandfather Nathan’s nieces. Her voice sounds surprisingly familiar. I close my eyes and I hear Szerenke – the same register, the same intonations. On the table in the little kitchen, the Sabbath candles are lit. The French window is open onto the rose garden that Uncle Eduard lovingly tends in this religious section of one of the oldest kibbutzim in Israel. Recently arrived from Czechoslovakia, during the final days of the Prague Spring, he is putting down new roots by tending his flower beds. Bending over the earth, he weeds, prunes, waters and contemplates, in infinite silence and with infinite patience. That same silence that echoed around their daughter’s table, where I first met them, at her apartment outside Tel Aviv. A gulf of silence between them and their grandson Judah, who is celebrating his twentieth birthday surrounded by his army friends. A gulf of silence, for want of a common language. Not Czech, nor Hungarian, nor German, nor Yiddish. Vectors of an entire world, culture, history, memory. So many internal wellsprings now forgotten, buried beneath the thick layer of the non-communicated, the non-communicable. Sabbath evening in the little blue kitchen, the fine white hand-embroidered tablecloth appears even whiter in the flickering candlelight. Aunt Renée and Uncle Eduard pray in Hebrew and chant the psalms with a gentle, grave joy. Then, in the quiet of the evening, in soft, low, solemn voices, they bring back to life a world that has been swallowed up. So many murdered loved ones, whom they alone remember and commemorate.

Taking turns, sometimes speaking at the same time, they tell their stories as if drinking long drafts from the fount of their lives, as if the starry night will never end. They speak in a German accented with all its neighbouring languages: Hungarian, Czech, Yiddish. Language of the soul, language without a home. Salvaged language.

A TREE PLANTED BY THE POET

When I was thirteen or fourteen, I was given a school travel grant. We wandered through the ruins of Dresden. I didn’t know then that it was the Allies who had deliberately reduced an area of light and beauty to ashes. An area without borders, belonging to an entire people, to all peoples. I didn’t yet know that there are silences that are also ways of rewriting history. I saw an old woman begging beside the Elbe. I began to speak to her, but the teacher accompanying us came over to stop me. Those gagged words haunted me for a long time; I felt a sense of betrayal. The words of the other, words reaching out to the other. Failing to take the step, to cross the border. I have never forgotten that broken figure in her black shawl, a German woman in mourning.

In Weimar, Goethe’s house on the vast Frauenplan. The first time I had been inside a poet’s home. I walked around it with reverence, as if it were a sanctuary of the mind. I was looking for slivers of life, of presence, in that huge mansion that had remained intact amid so many ruins. An absence that was peopled by poems. The voice of the poems I had just discovered and which spoke to me as though they were written in a private language. On that trip, I was also taken to Buchenwald. I did not know then that two or three years earlier, there had still been deportees there, prisoners of the Soviet police. In the camp’s deserted avenues, we were told about the struggle of the anti-fascists. One of the things I remember from that day is a huge, black death slab made of concrete or cement. A screed of silence. I didn’t know yet what I would later discover – that words and silences can be used to create languages known as doublespeak. And one day too I would find out that at Buchenwald there was ‘somewhere within the area of our camp, so they say, marked with a commemorative plaque and protected from us prisoners by a fence, a now nobly spreading tree, planted with his own hand’1 by the poet Goethe. Imre Kertész wrote those words with the eyes and words of his fourteen-year-old self, a Jewish child deported to Buchenwald.

Many years later, in a Berlin café, he told me that although he wrote in Hungarian, he still thought in the German of the Austro-Hungarian Empire. That supra-national, cross-border language in which he had grown up. An impregnable territory which no barbed-wire fence, no watchtower would ever be able to restrict or enclose, over which no barbarism would ever be able to cast its shadow.

Mireille Gansel, who taught German at the University of Lyon, has published translations of a number of distinguished poets including Nelly Sachs, Peter Huchel and Reiner Kunze, as well as letters by Paul Celan. After living for a time in Hanoi in the seventies, she published a volume of classical Vietnamese poetry translated into French.

Ros Schwartz has translated a wide range of Francophone fiction and non-fiction authors. In 2010 she published a new translation of Antoine de Saint-Exupéry’s The Little Prince, and is currently involved in re-translating a number of Simenon works for Penguin Classics’ new Simenon edition. In 2009 she was made Chevalier dans l’Ordre des Arts et des Lettres.