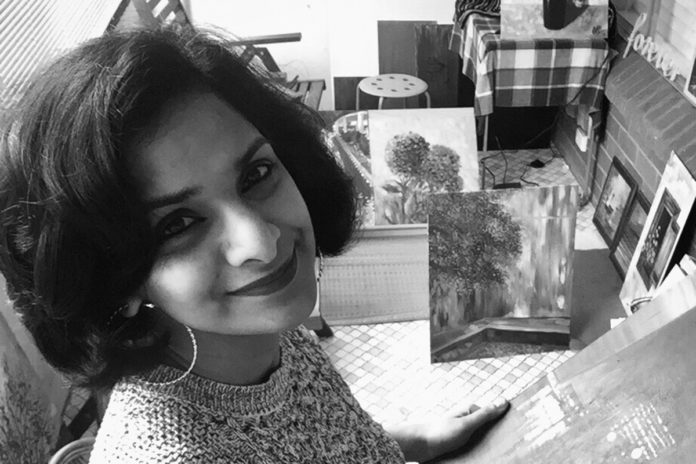 On most days
she is soft curled Medusa
her locks big animated S-es
insistent question marks
buoyant ends curving
into snake-eyed C-s
inky chocolate in the shade
haloed red in the sun
a mass of springy whorls.

on some days she wakes
with tidy tresses
barely a ripple in them
all strands shushed into alignment
undulations banished
like she had sleep-walked into a salon
where a stylist had flat-ironed
and stunned her hissing mane
into an obedient helmet.

those perplexed by her mutable hair
ask if she’s a natural curly
or a wavy tending to straight.
she only knows too well
what it is like to have
a crisis of identity
a surprise each morning
what her scalp will sport –
swollen swirls or streamlined strands.

while her mother and her daughter
rise from bed everyday
their crowning glory unaltered
she’s the lone transmuter
bridging two generations.

I hear him again
on the first floor in the studio
fingers articulating
for the umpteenth time
notes of that niggling phrase
in that Chopin Nocturne
but with far fewer hiccups
than last week.

Her free spirit surges
in tune with the song
of the southern oceans
a gauze of shells and bracing air
the hazel green of her eyes
soaking the last filaments of sun
lilac glimmer of cloud and sky
mingling seamless
spritz of moonlight
dusting the sea
and she beholds tonight
the six hundred and fiftieth orbit
the moon gently birth
in the folds of a batik sky.

Through the unmapped creases
of a meandering lifeline
through crests and troughs
she has walked
equanimous
serene waltz through samsara
with grace and poise rare
never the blemish of a complaint
ash of resentment
upon her upturned lips
the doorway to her heart
wreathed in smiles
moat of compassion
glinting gold.

She rises now on the horizon
Celtic goddess, opal crusted
throat filled
with mellow song
the pockmarked purple of the night
dazzling
with a million stellar bodies
her hands swirling pigments
reds, greens, and blues
as comets streak the night
dizzy staccato lights
the eyes of the Phoenix
like falling sequins
calligraphed in the heavens –
The best
is yet to come.

The Book of Magpies
for Thomas Thorpe

On the stippled lawns
I spy my two magpies
and as they warble and prance
in my sketchbook I chalk
the poetry of their gestures
brief, five-second poses held
sweaty artist’s models –
a foot gently raised, a wing half-drooped
spirited glint in mineral red eyes.

I’ve bestowed the most Indian of names
upon my Australian beauties
the charcoal-grey with speckled feathers
christened Mandaakini –
meandering vein of the holy Ganges
her handsome black mate
of ebony-blue plumage
Mahendran – Lord of the azure skies.

wings spread wide in Garuda mudra
Mandaakini glows, a celestial dancer
Mahendran, his head thrown back
a flicker of mischief in topaz eyes
surveys the arc of the heavens.

recurring on hills and plains
painted on alluvial sands
the lustrous soot of their streamlined forms
glow like silhouettes of silk
in the vivid vermillion
of a simmering Indian summer.

I conjure the book of magpies
thumbing through textured leaves
roused from their tableau, hearts aflutter
they come to life
waking, warbling
flying forth from the palms of my hands.

“The lone transmuter” is drawn from personal experience and is about my hair, which is of a wash and wear variety and never the same on two consecutive days.

“The piano lesson” was inspired by true events in a condo I used to live in.

I wrote “Hope song” recently for my friend Lathalia Hope Song, a hippie poet of Celtic heritage, for her 50th birthday, and “The book of magpies” was written to accompany an artist book filled with paintings of magpies that I created as a gift for the oldest member of my poetry group – Thomas Thorpe, who is 90.

Oormila Vijayakrishnan Prahlad is a Sydney based artist, poet, and pianist. She holds a Masters in English. Oormila has exhibited her art and accompanying poetry in Kuwait, India, Singapore, and Australia. She is a member of Sydney’s North Shore Poetry Project and Authora Australis. Her recent works have been published in Red Eft Review, The Ekphrastic Review, Poets Resist, Eunoia Review, Rue Scribe, The Maier Museum of Arts Journal of Ekphrastic Poetry, and several other literary journals in the US, Canada, Australia, and the UK. Oormila regularly performs her poetry and exhibits her art at shows in Sydney.