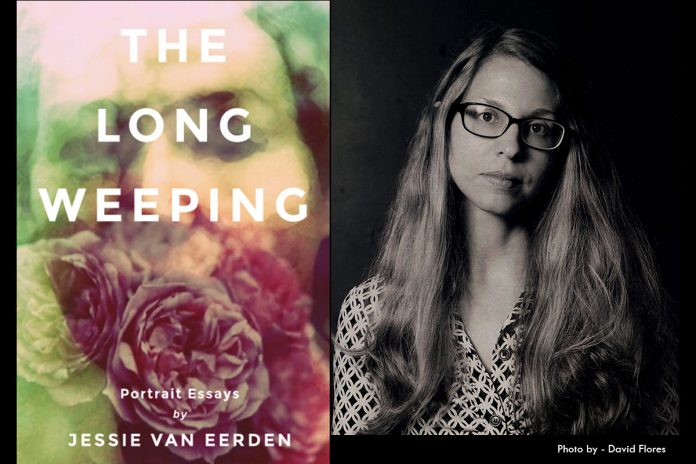 ( The Long Weeping – In this collection of portraits, the eye is the vital “lamp of the body,” a spiritual organ van Eerden uses to craft essays that are as much encounters as they are likenesses, as much being seen as seeing. The author’s religious tradition and the rural landscape of Terra Alta, West Virginia are two backgrounds that are neither chosen nor fully understood, but van Eerden’s attention to these matters becomes its own form of devotion, a longing to see and to believe—the longing itself taking on the robustness of faith. This is the common goal of these essays, to fully meet each subject and return to it some form of wholeness, a quest full of lush imagery and insights.)

Now Laban had two daughters. The name of the older was Leah, and the name of the younger was Rachel…So Jacob served seven years for Rachel, and they seemed to him but a few days because of the love he had for her…Laban gathered together all the people of the place and made a feast. But in the evening he took his daughter Leah and brought her to Jacob, and he went in to her…And in the morning, behold, it was Leah! And Jacob said to Laban, “What is this you have done to me? Did I not serve with you for Rachel? Why then have you deceived me?” Laban said, “It is not so done in our country, to give the younger before the firstborn. Complete the week of this one, and we will give you the other also in return for serving me another seven years.” Jacob did so, and completed her week. Then Laban gave him his daughter Rachel to be his wife…So Jacob went in to Rachel also, and he loved Rachel more than Leah.—Genesis 29:16–20

What I think is that she wakes up one morning and clears it all out. The men are counting their toes and their new sons’ toes, their umpteen wives, their purses of coin, scooping their barley heads into mounds like boys with contraband raisins. They flick the flies away, sneak watch chains under their coats, and the big heads of their hundred cattle rise and follow the trail of the sun like velvet-nosed satellite dishes.

It’s no wonder it’s a man—it’s Jacob—that dreams the ladder with restless angels clambering up and down, unable to decide between heaven and earth, because there are piles of good things everywhere—it’s distracting. And the women tally theirs too, even though their piles are smaller: a bracelet and gourd dipper, jug of clean water, a marriage which means a tent over your head. But I think that one day Leah clears out the place and walks up out of there, all the people watching this woman married by custom, the eldest daughter first before the younger one that Jacob really wanted. The people have always thought Leah mad for his favor, that because she is daily unloved by a husband who will open her legs only in pitch dark, and call her by her sister’s name, Rachel, his other wife, that she is to be pitied. But that is not what I think, not anymore. I think she is mad for something else. I think she has always gone about her regions of work in search of the main region: she went ahead and found names for her baby boys, she named them See, Hear, Fasten, Praise, and the later ones Hire and Dwell—her only girl she named Judgment—then she went on with the wash, the mopping, the beating of rugs, the tabulation of Jacob’s coins, all the while keeping all her old selves straight, on a string of beads, which I know to be a lot of work.

Loving him hasn’t been work, not really, not with his beautiful black hair and slight lisp, but she can’t be bothered with even that task today. No, today she gets down to the main work of clearing out the cluttering good of these comfortable things, the extra baggage, the clothes on her back, water in the well, her station in the tent village as a woman of means, whether pitied or not. She woke up this morning nearly smothered by these things that wear out her heart which is trying to see through them, like a kid in a crowd at the dogfights, hearing the terror of the gnawed shank but not getting to see it—go on and clear the crowd. I think she is naked and climbing the ridge beyond the swamp, climbing all morning and evening, into the night, her princely boys left sleeping, rocked by the handmaid, and Judgment with her hair a tangled spray on the pillow, and Leah stands out there, smelling peat moss and spruce, in the dark. She can breathe out there, terrified by so uncrowded a place, knowing, yes, this should terrify her. She vows right now to climb back down and work so hard to tell them there is something beyond all that, to tell the men hoarding their barley mounds, the women vying for new dresses and his favor and a son with the best name—to tell them (tell me) that you must come up here, out beyond the tents, where it is bare and lonely and shaped like loss. Otherwise how will you ever know your unknown self, a bead neither lost nor found, not a bead at all? How will you ever know, for the very first time, what it is you have always wanted?

Jessie van Eerden is the author of The Long Weeping: Portrait Essays (Orison Books, 2017) and two novels, Glorybound (WordFarm), recipient of the 2012 Editor’s Choice Fiction Prize from Foreword Reviews, and My Radio Radio (Vandalia Press, 2016). Her work has appeared in The Oxford American, Image, Cimarron Review, The River Teeth Reader, and Best American Spiritual Writing, among other places. Van Eerden received an MFA in nonfiction from the University of Iowa in 2007 and was awarded the 2007-2008 Milton Fellowship at Image and Seattle Pacific University for work on her first novel. She currently directs the low-residency MFA program at West Virginia Wesleyan College.