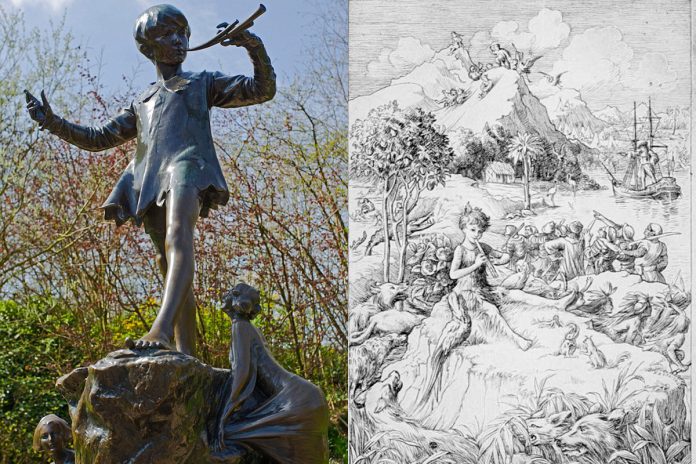 “You see, Wendy, when the first baby laughed for the first time, its laugh broke into a thousand pieces, and they all went skipping about, and that was the beginning of fairies.”

Not only did James Barrie pen Peter Pan, one of the most acclaimed of all fairy tales, but in it he revealed the origin of fairies . . . with an explanation I find completely satisfying!

James M. Barrie was already an established Scottish playwright when, on November 23, 1903, he began writing a play based on his make-believe adventures with the Davies boys—the four sons of John and Sylvia Llewelyn Davies, a London family into which he (Barrie) had insinuated himself. His play—about a boy who wouldn’t grow up—was first called Fairy, then Peter and Wendy, and then The Great White Father. It was Barrie’s American agent, Charles Frohman, who suggested the title Peter Pan.

Of the major Victorian fantasy writers, none wrote more beautifully than Barrie. His prose was full of irresistible anarchy, wit, and humor, stylish witticisms, and marvelously crafted phrases (“Second to the right, and straight on till morning”). He borrowed ideas from various places and artistically adapted them to his purposes with an economy that made them unforgetable. (Neverland, for instance, came from the name of an aboriginal area in northern Australia.) Barrie’s imagination, which always worked in unexpected ways and was the secret of his genius, gave us characters that have been immortalized in our culture: Wendy, Tinker Bell, the Lost Boys, Captain Hook, Smee, Tiger Lily, and, of course, the eternal youth, Peter Pan.

Peter Pan was set to open at the Duke of York theatre on December 22, 1904. The staging involved elaborate sets, the development of a new overhead system that allowed actors to fly above the stage, over fifty characters (including twenty-four speaking parts), music, choreography, etc. Barrie repeatedly revised the script until the day of the premier and beyond—it was not until twenty-four years later (1928) that he allowed it to be published. At dress rehearsal on December 21, disaster struck; one of the mechanical flying lifts collapsed, demolishing half the scenery, and leaving the director with no option but to postpone the opening until December 27 (the stage crew refused to work on Christmas). The cast rehearsed all night on the 26th and straggled home to bed at dawn. That evening, the curtain went up, and history was made.

In 1911, the story was published as a novel under the title Peter and Wendy. Modern readers will likely be shocked by certain elements—such as Peter’s nonchalance about murdering children and much political incorrectness—but the tale should be judged against the zing of a child’s silliness and not the zap of a grown-up’s stuffiness.

What makes a children’s fantasy a classic is its appeal to the old as well as the young. And for this reason, Peter Pan will forever be a classic.

For wouldn’t we all have refused to grow up, if only we’d been given the chance?