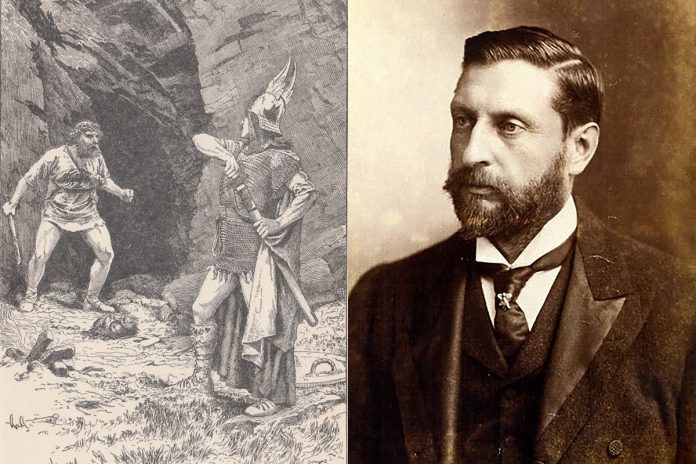 Before Indiana Jones, there was Allan Quatermain; before The Last Jedi, there was King Solomon’s Mines;and before the 1958 swashbuckler, The Vikings, there was the story of Eric Brighteyes. What the action-adventure movies and characters of Spielberg and Lucas were to the late twentieth century, the action-adventure stories and characters of H. Rider Haggard were a century earlier. Just as Allan Quatermain was included in The League of Extraordinary Gentlemen, so Quatermain’s creator deserves inclusion in the league of extraordinary Victorian fantasy authors.

Rider Haggard’s imagination was so imaginative that his close friend,Rudyard Kipling, suggested a study be made of it.(1) But more than just being an imagineer—Haggard knew how to tell a spell-binding tale.(2) As a minor bureaucrat in South Africa, he gained first-hand knowledge of the Dark Continent’s exotic locales, indigenous peoples, and lost worlds, which he put to good use in his stories. (Haggard, for instance, was one of the first Englishmen to learn of the 1879 British massacre at the Battle of Rorke’s Drift, depicted in the 1964 movie, Zulu­). When Rider mixed his imagination with his flair for writing and his knowledge of mysterious lands, the result was gripping novels that have sold millions of copies.

In 1888, Haggard sailed to Iceland to visit the site of one of his favorite Norse sagas, the story of Burnt Njal, and it was on this trip that he conceived the idea for Eric Brighteyes. (On his return voyage, the ship on which he traveled was caught in a terrible storm, foundered on rocks off Scotland, and the passengers were saved from drowning by courageous locals who came to their rescue). When he reached home, Haggard began writing his story and finished it on Christmas Day. The eminent critic Andrew Lang said of Eric Brighteyes (named after the book’s protagonist) that there was not a line in it not in keeping with the old Norse sagas. Tolkien loved the story,and his great fantasies bear its imprint. The tale is filled with heroism, romance, violence, friendship, and a smidgeon of magic. “Eric Brighteyes is the stereotypical Nordic hero: very handsome, very young, very strong, very brave—and rather stupid.”(3) But his love for Gudruda is unforgettable; his friendship with Skallagrim the Berserker, unshakeable; the jealousy of Swanhild the witch, uncomfortable; and the deaths of Eric, Skallagrim, and Swanhild, untimely.

Brighteyes – which Kipling called “as strong as wire rope”(4) – is a lesser-known work worthy of enduring popularity. As Haggard’s daughter wrote, it is “lit with the northern lights, and . . . with the cry of the Valkyries.” (5)

How could such a tale not be worth reading?

Footnotes:
1. Rudyard Kipling to Rider Haggard, The Record of a Friendship, 70.
2. To see a splendid example of this, google Allan Quatermain,and read chapter XXII, “How Umslopogaas Held the Stair.”
3. Michael D. C. Drout, Of Sorcerers and Men, 11.
4. Op cit., 30
5. The Cloak That I Left, Lilias Rider Haggard, 146.