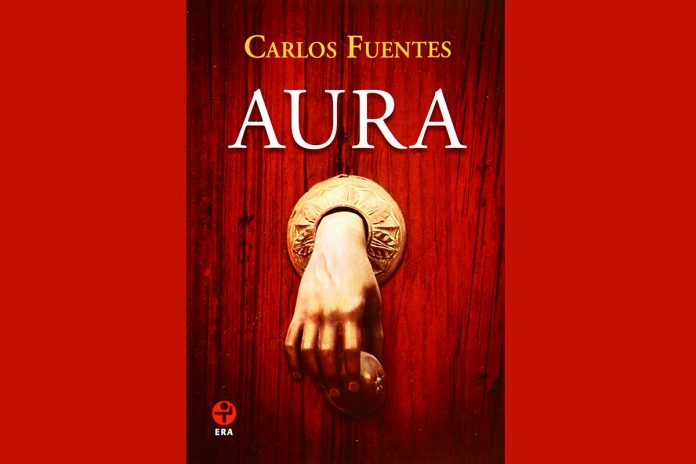 Felipe Montero sits reading a newspaper in a seedy café, when he is startled by a classified ad.  The solicitation seems written with him in mind.  Someone wants to hire a young historian, fluent in French, at a very high salary.  Montero has studied at the Sorbonne, is a skilled historical researcher, and his current part-time work as a teacher pays less than a quarter of the amount specified in the ad.

Felipe shows up to interview for the job, and finds that his potential employer is a decrepit old woman.  Her dead husband was a general who knew Napoleon III, fought with Maximilian and was later exiled in France.  His widow, near death, wants the general’s surviving journals turned into a publishable manuscript.  With few questions or formalities, she hires Montero.

But there are conditions.  The widow insists that Felipe work on the book aat her home, an antiquated, musty building infested by rats and so dark that candles are necessary to make one’s way from the bedroom to the dining room.  When he asks to return to his residence to gather his clothes and other necessities, she insists on sending a servant instead to collect them.

His new job makes Felipe uneasy.  His confinement seems more suitable for a jail sentence than a research project, but Montero willingly stays under the widow’s control, deeply attracted to the beautiful young girl Aura, niece and caregiver to the old woman.  Felipe and Aura soon become lovers, and though he considers eloping with her, he is reluctant to give up such a lucrative assignment.

And the General’s journals also capture his interest.  If he can believe the dates, the military officer died some sixty years ago, and his widow must be 109-years old.   Yet conventional measures of time and chronology don’t seem to apply in the widow’s house.  Even the niece Aura’s age appears to fluctuate from day to day—at first she is obviously a young lady, but later looks as though she is approaching middle-age, perhaps she’s closer to forty.  The absence of windows, the eternal darkness of the residence, the impenetrable gloom that borders on a psychological malaise—all these make it difficult to determine the women’s ages, or even identify tell-tale physical features, with any certainty.

In these pages, Carlos Fuentes reminds me again and again of Edgar Allan Poe.  Here we have so many Poe trademarks: the claustrophobic ambiance, the enclosing darkness, the ominous sense of family decline and ruin, the oppressive mental anxiety of the narrator.  Horror begins as an external force, but gradually turns into a state of mind, the mystery blurring, approaching the borderline where the supernatural ends and insanity begins.  Also like Poe, Fuentes is fascinated by the concept of the double, the pathological doppelganger who undermines our own sense of self, the unity of our personal identity.

The relationship between the widow and Aura suggests some type of mirrored existence.  The activities of one influences the behavior of the other, an unsettling mimesis that defies rational explanation.  And then Montero discovers in the General’s journals references to Aura—but how can that be, if those manuscripts were written more than a half-century before?  All identities eventually become suspect in this text.  Even our protagonist, the historian Felipe, struggles to maintain his role as the trustworthy outside observer, the upholder of reason in the face of the irrational.  The historian becomes subsumed in the history he is researching, the text gradually dictating his own new reality.

Fuentes is typically considered a political or ideological writer, and many of his better known works—such as The Old Gringo and The Death of Artemio Cruz- certainly draw their power from the narrative’s immersion in a particular socio-historical milieu. Yet Fuentes expressed ambivalent feelings about realism as a measuring stick for fiction. “It is not the novel that has died,” he once declared, “but the bourgeois form of the novel and its term of reference, realism.”  The influence of Poe, a countervailing force battling against ‘bourgeois’ realism in Fuentes’s work, can be detected again and again in his fiction, with echoes of The Narrative of A. Gordon Pym, “A Descent into the Maelstrom” and—especially with Aura—the reincarnation tales such as “Morella” and “Ligeia” imparting a peculiar quasi-gothic flavor to the proceedings.  The socio-political angle is never totally absent: here the editing of a historical journal provides a key linchpin in the plot of Aura.  Indeed, one of the lessons of Fuentes’s work is that the unresolved issues of the past can haunt the present, and in quite unexpected ways.  In this instance, readers encounter a very literal sort of haunting.

This is a novel of implication and atmospherics. Even as elements of the plot are resolved, the aura of mystery—and the mystery of Aura—refuse to emerge into the clarity of light.   The irrational triumphs as the victor, defying one of fiction’s foundational premises:  namely that events can be understood, that facts can be interpreted, that meaning rises above the flux and flow.  Even the final page, the story’s closing lines, merely pretend at closure, and just as easily could serve as entry point into a different tale. Or, a perhaps a return to the beginning of this one.

Published with permission from the author.