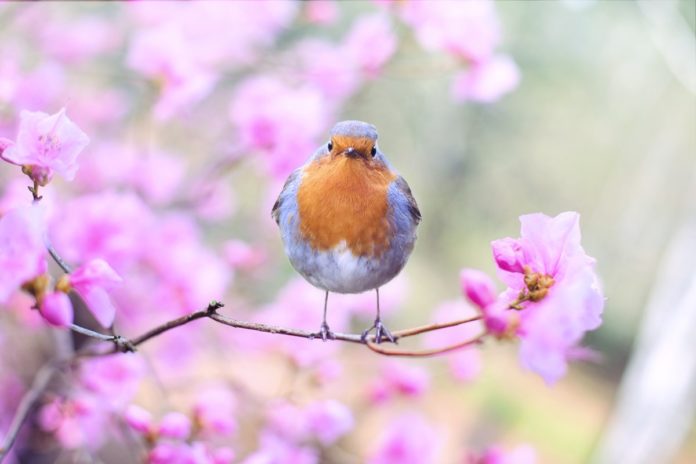 There is nothing more glorious than spring. Outside my window, the ledge around the bird feeder is full of sparrows and juncos and fat, happy squirrels, while the purple-green tips of tulip points are poking through the piles of  soggy leaves and mulch still covering my garden. Even though most of the world has ground to a standstill, the birds and flowers and trees continue along on their preset, springtime schedules.

I’m sorry
I think to the cockroaches that squish under my boots
as I walk home along the roaring breakers of ocean surf
on a thin strip of sidewalk crumbling slowly to sand. In the darker shadows
cat-sized rats scurry over concrete pilings, carrying greasy chip bags
hamburger wrappers and bits of rotting fruit in their mouths
claiming the fetid remains of the day for a midnight feast.
Years before, these rats and roaches would have been in hiding
in the ramshackle brick houses and empty warehouse spaces that used
to line this part of town, but now that all those old buildings are gone
and the new buildings, mostly condos, are too brightly lit for vermin
the rats and the roaches have all come down to the beach. The new condo owners
might have chased away the junkies and the whores
and the homeless drunks with their overflowing shopping carts
but the rats and the roaches are here to stay.

it was a long time, but I
still remember
fondly what it was like to kiss you. you said
it felt better kissing me, someone your own

age, than it did making out with my mother,
your aunt. I was just
young and insane enough to take that as a compliment
instead of thinking how weird it was
to be curled up in the back seat with my cousin. years

later, nobody knows where you are, last seen
homeless somewhere in California
I don’t want to know.

I threw away
everything that came
before he
was in
my life so
I could pretend
that I was brand new
just like the baby
I held in
my arms, just
like the perfect
baby that somehow
came out of me

he went crazy while I was still
at work. his friends had come over for lunch, saw him
go from reasonably odd to completely insane in
a matter of minutes. our son was sleeping in his crib
otherwise, they would have left, too.
I came in the door after
a long day at work, saw him pacing, pacing
lecturing wildly and waving his arms around his
head like he was trying to scare off
invisible flies.
“he’s all yours now, ” his friends said when
they saw me, shaking their heads in sympathy but
not wanting
to get involved. Ten

years later, I’m sitting in court, telling
stories of how things went from bad to worse.
“I don’t remember any of this, ” says the husband
I haven’t seen since our son was two years old.
“I’d like to apologize for
anything I did to you back then.” the lawyers smile at me
as if this will make it all better, will excuse the violent fights
the things he stole from me, the nights I slept with my son
curled up in my arms, afraid
of what was coming next.

the irony is not lost on me: checking
strips of treated paper every Monday, every Friday
praying and praying and failing to see
a “plus” sign appear in
the second window of the pregnancy test.

the irony is not lost on me: five years before
seeing this same sign made me
think briefly of suicide, led me to a life
I never would have lived, left me with a child
I would now die to have more of
if they could only be just like him.

the irony is not lost on me: two years, a single mother dating
squeaking by safely, using various forms
of uncomfortable contraception, and now
Husband #2 and I
can’t conceive. it’s ironic to think
that after the absolute hell #1 put me through
abuse, divorce, and complete financial abandonment
I owe him something
for giving me my son.

Holly Day’s poetry has recently appeared in Asimov’s Science Fiction, Grain, and Harvard Review. Her newest poetry collections are Where We Went Wrong (Clare Songbirds Publishing), Into the Cracks (Golden Antelope Press), Cross Referencing a Book of Summer (Silver Bow Publishing), and The Tooth is the Largest Organ in the Human Body (Anaphora Literary Press).