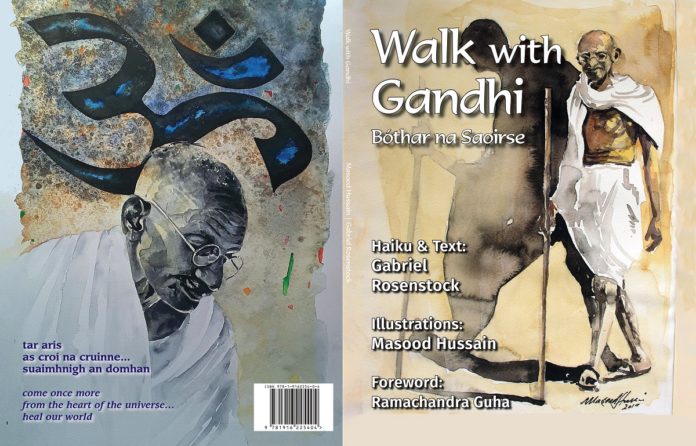 Walk with Gandhi is a book of haiku poetry (bilingual- English & Irish), each poem accompanied by a beautiful painting. The poems are written by Gabriel Rosenstock and the paintings are contributed by Masood Hussain. Each haiku captures a distinct, remarkable episode of Gandhi’s life and the accompanying painting accentuates the effect. Or, is the other way round?

In that sense, Walk with Gandhi is a collection of haiga designed to capture the life of Mahatma Gandhi. It is wonderful that the reader is able to get a marvelous grasp of Gandhi’s persona through these minimalist poems. From a post-modern perspective, the life of Gandhi yields multiple unique perspectives like how a poem does to different readers.  Each poem in Walk with Gandhi touches a unique aspect of Gandhi’s’ life and after completing reading the book, the reader is left not with discrete pieces of a life portrait, but a picture larger than life.

The brief notes at the end of each page will help young readers to place the poems against some historic background. However after absorbing the essence of these brief notes, a re-reading of the book with only the poems and the pictures yields a much deeper reading experience.

Haiku are like highly concentrated matter that occupy little space. Their brevity is often misleading. It is the choice of the words and their unique combination that result in their punching power. They strike the reader’s consciousness from unexpected quarters. The haiga in this collection are no exception. Whether the paintings preceded the poems or vice versa, it is difficult to guess; but the fact that they go hand in hand cannot be refuted.

In the backdrop of this haiku collection, the book forces the reader to have a rethink about the false pretensions that guide every individual’s personal and social life in the current times. The global social turmoil is nothing but a sum total of the spiritual turmoil experienced by all the inhabitants of this world. Gandhi’s’ life and teachings were strongly perched on this belief. Walk with Gandhi awakens us to this truth.

Why Walk with Gandhi ?  Consider this:

Salt March to Dandi  was an act of nonviolent civil disobedience in colonial India led by  Gandhi. Walking ten miles a day for 24 days, the march spanned over 240 miles. It was a direct action campaign of tax resistance and nonviolent protest against the British salt monopoly. During the March, unleashing of force by way of beating by British police of hundreds of nonviolent protesters received worldwide news coverage and demonstrated the effective use of civil disobedience as a technique for fighting social and political injustice.

Ezra Pound, had once noted the power of haiku’s brevity and juxtaposed images. He wrote, “The image itself is speech. The image is the word beyond formulated language.”

Now, you are welcome to Walk with Gandhi !

Masood Hussain, an accomplished draughtsman and prolific watercolorist, honed his formidable skills at Sir J.J. Institute of Applied Arts, Mumbai. Masood teaches at the Institute of Music & Fine Arts in Srinagar, Kashmir, where he was born and raised. “The Vale of Kashmir draws us to imagine ourselves,” Masood says, “amidst her lush shades of green, crystal clear lakes, gushing streams, snow-capped peaks — a paradise that has sadly been in pathos now for over a generation. We need a Gandhi to sort us out.” 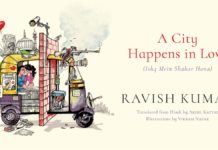 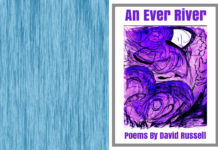 An Ever River – By David Russell (Eco Poetry) 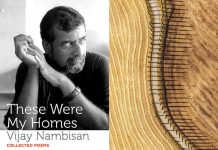