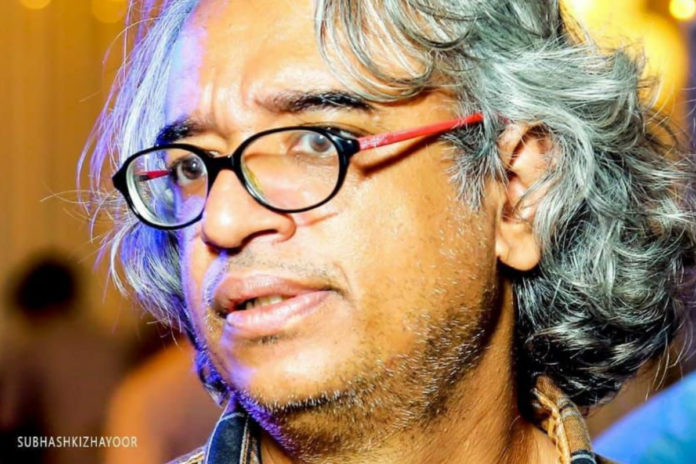 The God who searches
the earth
for his misplaced river
is my God.

The god who waves
a torch in outer space
searching for a windswept leaf
is my God.

How to imagine a different God,
when I’m weary of seeking
the paper misplaced
in this book?

The Maestro* Arises As the Poem Ends

Unable to handle
the pleasure of flying,
falls the nestling with tired wings.

Unable to bear
the pleasure of grazing the moon,
falls the kid that scaled the mountain.

The dew on grass
beholds your departure from the body,
unable to bear the pleasure.

Seeking utmost pleasure
love and freedom,
the poet arises from his departed body.

(*)  With reference to the legendary Malayalam poet, Kumaran Asan. Also, the poem references Kumaran Asan’s poems such as Kochu KIli, Nalini, and Ambili.

What would the white cranes
with curvy necks do
if that tree isn’t there next year?

That small tree
where the fatigue of flying
thousands of miles,
perches, once a year.

Like an antique kite
with a long white tail that
lazily latches onto the tree branch,
its whiteness unfaded.

Once when I saw, they sat
with wilted wings
that seem to be just folded.

Another year,
they danced away weariness.

As soon as they journey,
will they sense the trees absence?
Will they arrive and keep circling at the spot?
Will they opt for the next tree?
Will that tree become their norm?
Or, will they fly back even without resting?
Will they declare with their beak and wings
their decision to never return?

If that house isn’t there,
if that man isn’t there,
will I declare a similar decision
with my hands and wings?

Dracula — After Draining Out Fear

One wades
through the city rush
with a suitcase
bearing a fistful of dark stinking soil
to be laid to rest.

Right now
on this footpath
he intends
to open the suitcase
to jump in and close the lid from within
to slide into the final rest.

No,
in the streets
he would lie on his back,
hold the suitcase above his chest
as if a book wide open
to drown in the pile of stinking mud
that it dumps.

Actually,
walked past without giving a hoot.
But when the moroseness of his face
vented the stink of soil
in an instance..