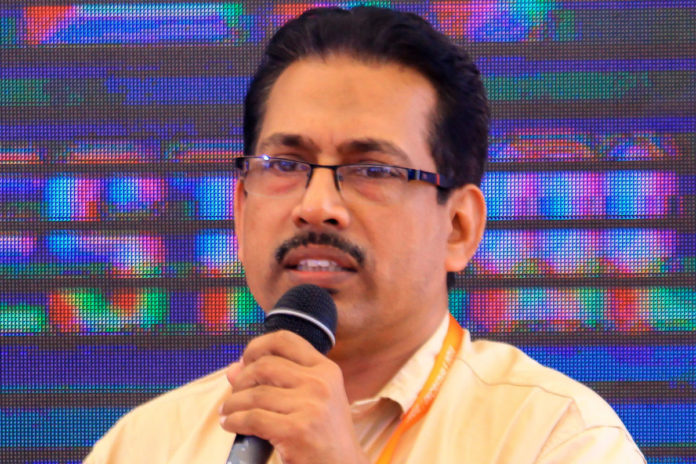 Overnight,
a sapling sprouts inadvertently
in the earthen pot
that Umma rinsed with water.

In the clayiness of the soil
prior to turning a pot,
a seed must have been preserved.

That night,
it must have found
the desire to germinate,
to grow
from Umma’s touch.

Primordially,
I too would have
been preserved in Umma.

Which love of the earth
germinated me
in her?

But thunder,
what a bore!
It loudly utters,
reveals a secret.

How long
can a house built on gloom
remain so?

Till those
blinded by love arrive.

Now,
it is a house built on light.
Tiny suns
play in its courtyard.

Each rain
is a vertical ocean.
Who drives away
the ships from God
about to reach the earth?

Wind is
the ether-dipped cotton
that God threw down.

Will routes be spared
for the cotton
to soak pain from wounds
and return?

A silent lake
breaks its hip,
rots and oozes pus
in its lying.

A mountain
too old
to stoop down and examine
its swollen thumb.

A lightning
unable to keep watch,
unsure if the swing of its dagger
slashed someone.

A drizzle
that fails
to cleanse the
abscess of the soil.

I leave
at the end of visiting time.

Someone
sutures the eye
with the needle of darkness.

Veerankutty is a Malayalam Poet and works as an Associate Professor at the Dept. of Malayalam, Govt College, Madappally. He was born in Narayamkulam, Kerala, India. His poems have been translated into English, German, Tamil, Kannada, Marathi and Hindi. Veerankutty was awarded the K.S.K.Thalikkulam Award for his poetry collection ‘Jalabhoopadam‘ in 2001. He has also received various other awards including S.B.T Award, Tamil Nadu C.T.M.A Sahithya Puraskaram, Cherusseri Sahithya Puraskaram, Abudhabi Harithakshara Puraskaaram and V.T. Kumaran Kavya Puraskaram. He has also won Mahakavi P Kunjiraman Nair Kavitha Puraskaaram, Ayanam A Ayyappan Puraskaram in 2016 and Dubai Galleria Literary Award in 2017 for his anthology ‘Veerankuttiyute Kavithakal‘. His anthology, Mindaprani was selected for the 2017 Kerala Sahitya Akademi Award for Poetry.