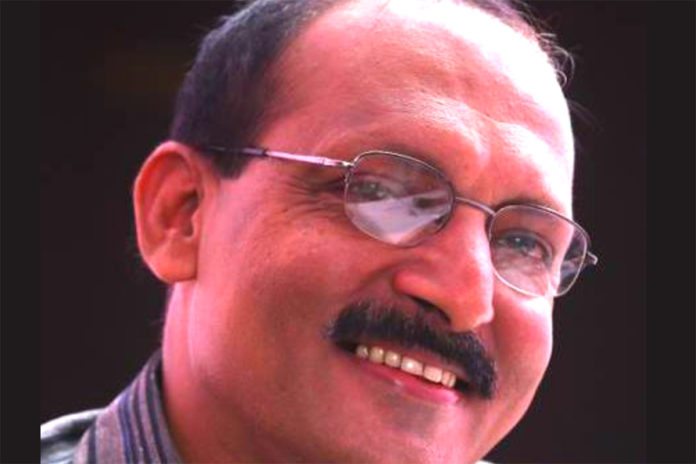 The Sweeper At the Bus Station

She might lack far sightedness.
But to the minutest speck of dust,
she sees the dusty floor
beneath her step.

Loud, the roar of vehicles.
But she hears,
the natter of sand.

While picking up a half burnt bidi,
searing life burns her hand.

Someone cries from the trash covers,
the life that hangs from the cloth swing.

In the undone glittering candy wrapper,
she sees
the soiled golden crown of Mahabali.

Me,
a hollow mass
wrapped in spotless white,
boards a bus stuffed with trash.

Sure,
the tip of her broom wouldn’t reach here.
But a needless cloud roars in the heart.

Though the squarish window sights fade,
a broom
spreads its blue plumage in memory.

Those days
straight out of the factory,
I recollect how I thrilled
the national highway
with my speed.

How the speedometer
clocked seventy,
then eighty,
grinded to a halt
after touching ninety.

And then
how I became a run down
mounted on wooden blocks,
rusted all over,
tyres deflated,
wind alike,
blocking the way.

Once in a while,
a fly or a flea
perched on my back,

a lost dog or cat
sheltered underneath
for a while.

Many cycles of
monsoon and summer paid visit,
grass sprouted all around.

One day,
an unknown climber
grazed my engine.

Ho!
The fuel of the earth
fired me up.

Hissing,
I tapped on
the head with my tail
patted my thighs
and leaped as well as I could.
How I flew in wind speed
across the seas.

An auto-rickshaw
is a hapless mother
struggling to manage
her three unruly kids.

In between avoiding potholes
on the road,
the driver said:
I am a poet,
my poems will appear
in a print magazine soon.

A few days ago,
at a steep slope,
the god of three wheels
stopped his vehicle
for a ride.

You are a poet
destined for fame.
Pass this duty to me and
occupy the back seat.

For the first time,
he sat in the passenger’s seat
of his own rickshaw.

P.P. Ramachandran, born at Vattamkulam in Malappuram, is a Malayalam poet. His collected volumes are Kanekkane, Randay Murichathu and P.P. Ramachandrante Kavithakal. Kanekkane won the Kerala Sahitya Akademi Award in the year 2003. Katte Kadale won the P Kunhiraman Nair Poetry Award in 2013. Some of the other awards he received include Cherusseri Award, Kunjupillai memorial award, Changampuzha award and VK Kuman Award. Ramachandran also served as a a high school teacher at A.V.High School, Ponnani.