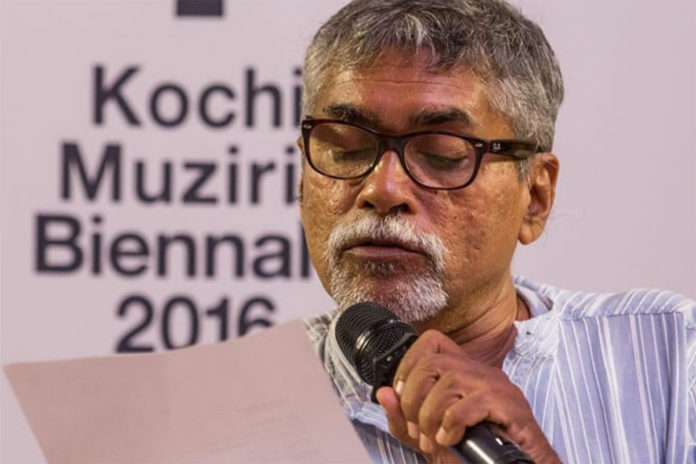 The history of modern Malayalam poetry is a narrative of continuous innovation, gradual emancipation from the formalistic grip of traditional Sanskrit poetic practice, growing awareness of contemporary social issues and the ongoing democratization of the genre in thematic as well as formal aspects. In the process, paradigms have been tried and abandoned, communities imagined and dissolved, traditions constructed and deconstructed, the concepts of the region and the nation alternately tried out, the impact of foreign literatures absorbed and transcended, the classical and the folk heritage explored one after the other, fresh genres and formal devices employed and indigenized and the concept of the avant-garde transformed from one generation to the next.                          (Extract from the article ‘Malayalam Poetry Today’ by K.Satchidanandan)

My father whose cheeks
dulled on seeing me,
transformed into the grin
of a squeezed smiley ball;
He used to love a dog,
gifting it a morsel and a whack.

The dog used to wag its tail.

Why did my father
love the dog instead of me?

It is challenging to raise a human kid.
On a white cement wall
that consumes
ten mandays of labour,
he might doodle with charcoal.

Machine and My Life

Went to the Coconut Research Centre
in a motorcycle,
bought a sapling

guided the vehicle loaded with saplings,
driving the motorcycle

sped on the motorcycle,
sought and found a labourer

went on a motorcycle
to buy fertilizers

need to give
five or six tender coconuts to mom

secured a bunch of tender coconuts
on the motorcycle,
went to see mom

this machine
of nuts bolts chains
and of little rust
is half my body,

the ideal soil
for my model coconut farming.

It is easy to talk to someone these days
there is nothing much to say, to listen
It’s much easier through the phone
No need to look at a face
to ask
in which class is your son or
what’s happening,
to say
that I’m immersed in reading Harry Potter
that he or she began wearing jeans ripped at the back.
We can keep rambling.

The talk between C and D is mostly
a copy of a such a talk
that happened between A and B,
with minor modifications.
DaVinci Code instead of Harry Potter
entrance examinations and so on.

But humans are romantics
a naughtiness perishes deviates
one from the permitted path
haven’t seen you in a while, says she
why should i come is the reply
silence is fragrant
dream is the same dream
I do not know of any good word
closer to soul
in this life of solid matter.

No state is constant
a matter of moments, the stink spreads
else, I would have admitted my love
then the world wouldn’t function this well

Some issue with the washing machine
I will call you later,
the flirting ended.

Thanks to the washing machine
for prolonging the pain and fragrance of the unsaid
till the day our zillion stars burn out.

N.G. Unnikrishnan is a poet and translator in Malayalam. He has four collections of poems and two translated works published by DC Books. His poems translated into English have appeared in IL, Muse India and in other online magazines. His poems are included in anthologies like Kavithayude Noottand (Malayalam Poetry from 1900 to 2000), and Vettuvazhi Kavitakal. A retired Associate professor, he is now a freelance writer. He lives in Kaitharam, Ernakulam District.